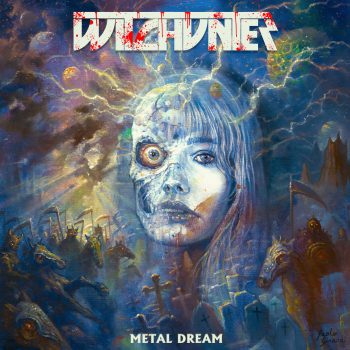 Founded in 2007, Italy’s Witchunter began as the manifestation of true heavy metal obsession. Foremost among those metallic obsessions were the NWOBHM, 80s European heavy metal and speed metal, and especially 70s hard rock sounds and attitude. It all coalesced together into a paradoxically refreshing time-warp where traditional speed metal in the vein of Angel Witch, Jaguar, Tygers of Pan Tang, and Saxon get the subtlest of twists, not to mention some evil mixing in a manner most Mercyful Fate and Black Sabbath. A true purist’s band, then, but not one that’s just lazy pastiche: Witchunter are the real deal, from the beginning to now!

And now, since long years after their last LP, Witchunter return hungrier than ever! Metal Dream is the name of that long-awaited comeback, and a more simple-yet-sublime title you will not find. Gleaming with a chrome-encased production that’s pure 80s valour, Witchunter’s latest spans all the band’s previous styles – dramatic speed metal overdrive, leather-and-chains strut, balls-to-the-wall headbangers – but the pure passion and charisma in which they deliver these nine primary tracks, the seamless expression of HEAVY METAL in ALL its glories, makes Metal Dream astounding to behold. Hooks, solos, aggression, dynamics, high notes, manliness, variety, everything heading out to the highway, and even some tasteful nods to Tony Martin-era Sabbath: it’s a veritable jukebox of ’82-’87, if we’re being specific, although it’s all palatably modern just the same. Witchunter truly LIVE this, and it comes through loud ‘n’ proud in their songwriting.

If your metal heart beats purer than steel, awaken to Witchunter’s Metal Dream!