WILLIE AND THE BANDITS – When The World Stood Still – (Album Review) 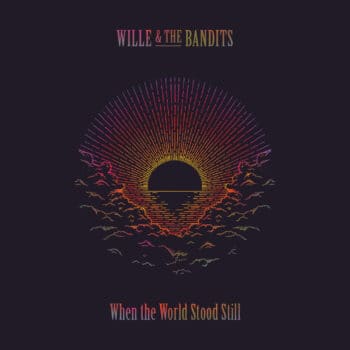 Willie & The Bandits: When The World Stood Still (New Album Out 28 January On Fat Toad Records)

Willie & The Bandits return with their sixth album When The World Stood Still on Friday 28 January on their own Fat Toad Records.

Since the last album Paths only the frontman Willie Edwards remains. Here he is as always on lead vocals, whilst playing electric and acoustic guitars, dobro and electric steel guitar. The new guys are Harry MacKaill on bass, synths and backing vocals. Matthew Gallagher on Hammond organ, Fender Rhodes piano, mellotron, guitars and backing vocals. Last but by no means least Tom Gilkes on drums and percussion including on one track apparently even the cutlery and a birdcage!

The band have been described as “rootsy rock” but I would prefer to say they are a blues-based genre-straddling outfit. Willie and assorted Bandits have been around since 2010 when they released their first album called New Breed. They are from Cornwall and they recorded their latest at Sawmills Studio. This can only be reached by an ancient Roman roadway or boat. Due to current circumstances, the studio may be closing. If it does then this will be the last album recorded there.

Lyrically they have always touched on subjects such as politics and the environment (I believe they ask venues not to supply water via single-use containers for instance, they take it seriously) and on this they continue to do so. As you can tell from the title the album deals with the last 2 years whilst the world was shut down but it isn’t all depressing, They highlight some things which might be good from it all, light and shade here. There are 12 songs and around an hour of music.

They show their genre-defying attitudes and talent within the first song “Caught In The Middle” which mixes up rock, folk and hip hop! All in 4 fantastic minutes. The super opening riff drops down into a hip hop vocal, quite mellow at points and including some delicious gentle acoustic guitar work especially nearer the end of the song. Lyrically about the UK and where it stands after Brexit. We “dream of better days, to never fight a war, to never need a cage” but sadly for us it all ends up just being “about the money” so the rich can keep their offshore tax havens. The main riff grooves and it kicks some ass.

“I’m Alive” has a melody in it that reminded me of the Paul Simon song “50 Ways To Leave Your Lover” before going all 60s psychedelic where the percussion comes into its own. There is an Eastern feel to some of the song, the echo of the guitar transporting you away to far-off lands. The other thing very noticeable in this is the terrific keyboard work, the organ is used to great effect whether being upfront or adding texture. This is one of the songs that Willie‘s screamed vocals rip through you, there is pain expressed here. 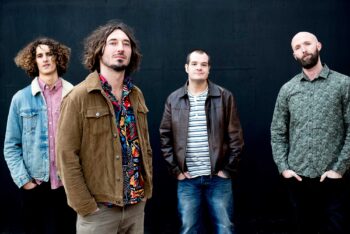 Willie & The Bandits: The Band

“Without You” is about the loss of a loved one and the press notes say it is them doing a “Stairway To Heaven” meets Pink Floyd musically. Definitely, there is a Dave Gilmour vibe in the guitar work that is a mix of moody and disturbing or haunting. It has a very quiet opening, a long bass note before the acoustic guitar comes in. The track floats between heavier moments and sections that are whispered and it feels quite claustrophobic at times. There is a sturdy riff around the chorus but it is an intriguing listen.

“Good Stuff” is as you would expect more upbeat and features Willie on bottleneck slide. It is a mix of ZZ Top and AC/DC in the groove and riff. There are plenty “wo-ahs” in the chorus for audience participation and is a fun listen. Keeping it more uptempo is “In This Together” which asks the question of “are we really?”. A heavier blues vibe somewhat sounds like scathing views on our “leaders”, which considering what the UK government were up to as we all lockdowned possibly aren’t angry enough! We are “Holding out for a fall from grace” perhaps for those chancers to get their comeuppance.

One Of Their Best Ever?

They change style again a little for “Will We Ever” which incorporates some Southern rock vibes into the bluesy piece. It’s another track that is improved by some wonderful organ work in the background. The title song is in my view one of the best songs they have ever written and performed. Beautiful musically, vocally, stylistically and lyrically.

This is a song that looks at perhaps one benefit of the world shutting down, the effect on both pollution and for the animal kingdom. We may have lost our freedoms, the streets were quieter of humans so the creatures came out to play. Personally, I saw more foxes, etc locally looking out my window than I normally would have, and I heard bird song much clearer when the windows were open.

The hope that we could perhaps “build back a better way, for the planet to survive, this could be a blessing in disguise“. He points out also the “sacrifice” of many folks. Those who worked for all our benefits, nurses, bin men, shop workers, delivery drivers etc making sure we eat and were safe during the pandemic. Band wise Harry is on double bass, Matt on piano and Willie on dobro. 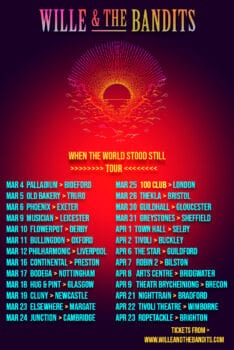 Incoherent Bumbling Nonsense (not this review)

“Move Too Fast” has some funk and soul in there. The attention to colour, with both the organ and percussive touches, adds to the piece tremendously. The guitar solo is influenced by Derek Trucks with the guitar imitating a human voice.

“Broken Words” is one of my personal favourites here, and not just because I agree with the lyrics about the incoherent bumbling nonsense delivered by the UK Prime Minister at the dispatch box. The use of a stuttering vocal here captures that as well as being a huge amount of fun to singalong with (this will be a hoot live). At one point the lyrics request “give us a line and actually mean it” followed by saying he is “waiting for words of wisdom” but only to hear “bap de bup de bup” instead. This is the song that features the kitchen items.

“Daylight” is a song for his second daughter (he wrote one for his first too, no favouritism here), and as she is apparently a bit of a “force of nature” so the music is quite exuberant to match her personality. Lyrically it is how he feels about her and how she affects him. The music is quite heavy and nods towards Led Zeppelin especially drum-wise.

“Refuge” has a Tom Petty vibe in the rocky parts and the chorus. Quite a bit of it is stripped down to allow vocals to be the focal point. The “yeahs” will be another crowd participation moment I would imagine.

The concluding song “Solid Ground” is another fantastic track and certainly gives a nod to Peter Green guitar-wise. The vocals sound so pained and full of anguish at times. His concern for the planet and the sort of world we are leaving our children obviously hits him hard. He is honest about how much of a hypocrite he feels as he obviously thinks he could do more. Some of it is so sparse sounding, loads of room for all the little touches of instrumentation to be heard and appreciated. The solo is mean moody and magnificent. The emotion pours out of it. The ending when it arrives is quiet, eerie sounding and has lyrics whispered oh so quietly. Stunning stuff.

Already A Candidate For Album Of The Year?

This is quite different from the last album which was quite upbeat for the most part. This is darker, even more reflective than anything that he and the band have done before. They have captured the times we have been living in, whether it being lyrics about loss or the political mess caused by inept leaders whilst still having songs about how maybe, just maybe these brief moments in the history of time might have helped our planet and the other creatures who live on it. Musically fascinating as always with terrific performances from all involved. Is it too early to put forward a candidate for album of the year? This is very likely to be up there when December comes around.

Check out my other reviews and articles here, Tom