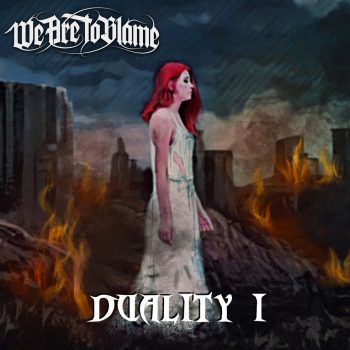 WE ARE TO BLAME – Duality I

What happens when the joy of Astrid Lindgren‘s wonderful stories intertwines with the melancholy born from the endless nights north of the Arctic Circle?

When Johan Karlsson posted an ad for a pop vocalist for a metal project in early 2020, Alice Hartvig was both interested and skeptical. Although she was an experienced vocalist, she had never been involved with metal music before. After a quick discussion and a demo recording, however, it was clear that she was the perfect fit for Johan‘s vision and We Are To Blame was born.

Together with guitarist Urban Granbacke, they began to write the beginning of We Are To Blame‘s story. Marrying the vocal lines and melodies from pop with the massive foundation of metal, they aim to bring a fresh perspective in a familiar voice. With strong lyrical themes that lie close to their hearts, they want to bring music that moves the listener.

The band’s sound is influenced by power metal, melodic death metal as well as progressive metal. Utilizing both symphonic and electronic elements in combination with Alice‘s vocals, with a strong focus on providing each song with its own identity.

The band is releasing their debut EP Duality I on November 1st, 2022.

We Are To Blame are:

We Are To Blame – Breathe (Official Music Video)

Upcoming ReleasesDuality 1, We Are To Blame