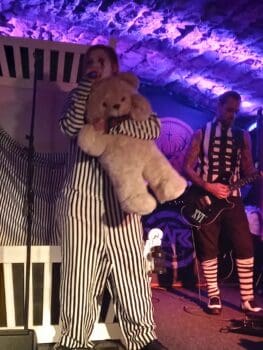 Such A Sweet Little Girl With Teddy! (Dr Von Stottenstein In Background)

The patients of Ward XVI brought their insanity to Bannerman’s Bar in Edinburgh on Sunday 8th May, 2022.

The band released the absolutely brilliant Metamorphosis album back in 2020 which was reviewed on this site at the time and which can be read HERE. The album for those who are unaware is a concept piece telling the story of Psychoberriefrom her entry into the world at the hands of what turns out to be an alcoholic mother, meaning that her childhood is a rather lonely one where her toys are her friend. She loves her mum, well until her mother starts taking her anger out on her, hitting her. Her nightmares become reality and eventually as a teen (roughly) she decides to get rid of her mum! Yes she becomes a killer who goes on the run.

By the end of the album she has been caught and is sentenced to an asylum where she faces her demons. The reason I write this out on the live review is because this is the show! They perform the whole piece in one go with actors playing lots of characters along with plenty of props. I must admit I was worried as to how they would pull it all off. There is plenty of subtlety on the album both musically and lyrically. One wondered if that might be lost in the live environment with all the chaos going on. Did they manage to pull it off? Read on for the answer.

The Gig Or Show

The stage is set up with a bed (which is upright of course) in the middle of the stage and a big toy box stage right. The band come on stage to a tape of the first track “Retrogression” where we hear Psychoberrie being interviewed by her psychiatrist.

As the second track starts with the sound of a music box, out comes from behind the curtain the mother holding her little baby as sound effects of crying come through. The actress spoke along with the words coming out of the speakers to the doll that was the baby in her arms. We are into “The Cradle Song” which features some delightful guitar soloing from Dr Von Stottenstein.

Psychoberriesings with clarity and sensitivity, whilst manic circus music comes in and out between her verses and choruses. The beauty mixed with madness already unfolding all in one 8-minute piece. It is my favourite song on the album and by God they nailed it. The melody line is so good and with the vocal performance on top this blew me completely away. 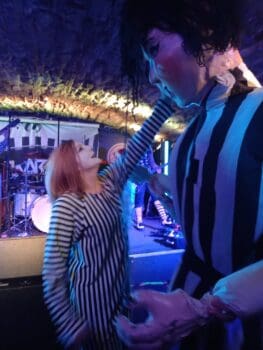 Things become even crazier as the show continues with all sorts of mayhem on stage (which is not massive) as well as onto the floor. Characters at points in various costumes running amok amongst the crowd. “Mr Babadook” has our Miss Berrie still in children’s nightwear kneeling next to the bed. She gets in (still standing up of course so we can see her) as a figure with large scary hands comes on stage and starts attacking her.

The beast is based on the character of the movie with the same name and has the scared little girl edging further across the bed. This is a song that has a strong chorus and a fabulous groovy riff that has heads moving in the crowd (not too much as everyone wanted to see what happened next onstage).

“Daisy Chains” got everybody swaying side to side due to sounding like Bierkeller music. The action happened on the floor in amongst the crowd as a very large mother (controlled by someone in the costume) drinks from a bottle of alcohol. You see her love for her mum when she is dancing then the confusion of being hit in the face followed by the fear and rising anger.

What I thought was impressive was that the voice stayed strong despite all the performance going on. The acting facially (helped also with paint) was very expressive indeed. “Broken Toys” has her playing with a battered barbie and the music gets more manic. The almost deranged sounding “Na na na na“s (her facial expressions on them were superb) got the crowd singing along. Heads were moving side to side to the time of the music beside me as people joined in.

Things of course get darker as she decides to take action and free herself of her mum. The urgency of the music in “Imago” matches her mood. Anger, frustration boiling over. Why should she be the only one to suffer? She admits that she is now happy to be a guest of the devil, who of course appears onstage giving her plenty of encouragement to carry out her evil.

The line about meeting in “hell in the afterparty” is sung with great gusto. In fact, it appeared to be written on her boots! Again the music matches the mood and the band seem so adept at delivering all the styles live as in the studio. There are of course backing tapes for sound effects and some of the weirder instruments but the main music is supplied fully by the players on the stage.

“A Goodnight Shot” took a new turn for me live. I didn’t realise that shot was being played in both ways. It is there in the lyrics but the whole thing that mother is having her last “shot” of whiskey I missed as I focussed on the actual shot from the gun that kills her. The level of attention to detail stage wise so that mother drools as she convulses at the poison in her drink.

Yes, no chances are being taken. Her mother is going to die. Poison her then shoot her. I love the gentle vocals on this, there is a tinge of love still there, possibly along with sadness before she becomes completely lost in her mental state.   Wonderful stuff. 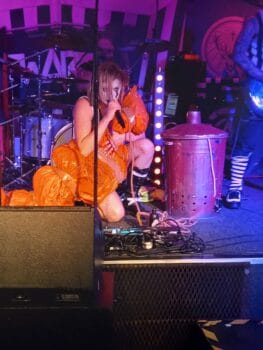 Bin and “Burn The Witch”

Having killed her mum, what next? Well, got to get rid of the body. Psychoberrietakes her mother’s body now wrapped in bin bags and heaves her into a garbage bin. We see smoke coming from the bin. Yes indeed it was time to “Burn The Witch“. Again within the performance, she shows some regret (maybe the last vestiges of the little girl within her) as she holds her on the ground before that passes and she burns mother as garbage.

Miss Berrie goes around the crowd getting folks to scream “burn” in the mike. The guitar solo rocked like a bastard! It all becomes intense, musically heavy in “Catch Me If You Can“. This has the fastest riffage and a wonderful groovy section around halfway through. The whole thing ends as the album with the voiceover of the judge handing out her sentence.

As they had done the whole album with full production they went back to the first album to play 3 songs (including the encore as such). They said that it was now “party time” in that it is all about jumping around and rocking out. “Cry Of The Siren” sounded terrific with some fine playing and a great vocal. There is plenty of good riffage in there as well. “Toy Box” had the singer on the floor. A huge circle was formed in the front area for some leg kicking and swaying and bouncing, general mayhem and fun.

As I looked around I could see massive smiles on everyone’s faces in the crowd. The band looked like they were having a ball too. They finished the night with the track of their name “Ward XVI” where the cast acted as crazy and disturbed as possible at the front of stage. They made some pictures that is for sure. 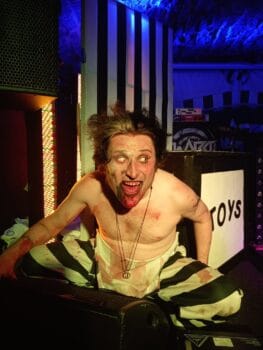 I want to make clear something about the night and the band. Yes, they put on a show with props and face paint. Now lots of bands have done similar in the rock and metal world. Some of those to be honest it could be to cover up the lack of good songs and actual melodies. Ward XVI are not one of those.

They have songs that are memorable, lyrics that have humour and pathos (all good villains have to have something likeable about them) and a singer that can pull out emotion along with power when needed.

I had high hopes and expectations. I can truly say this band smashed the lot of them. The storytelling (which is great on the album) is done visually very well. There is obviously plenty of thought gone into that side of things. In fact, I learned afterwards that to solve the problem of “mother” getting up and off the stage after being shot (which looked odd) they decided to use the devil character to come back on and entice her towards him and into hell. With care and attention to detail, they put on the show.

The fact they also have the riffs and melodies to enjoy makes those props etc a bonus on top of a quality band playing some great music. If the band brings the show (and most importantly themselves) near you dear reader then get yourself along. A fabulous night of musical theatre that rocks (and is a hoot) is guaranteed!