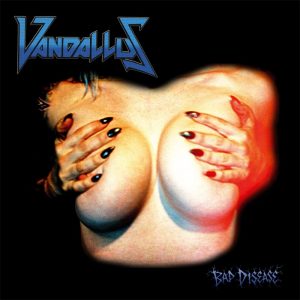 Although the initial offering from Ohio’s Vandallus arrived in 2016, the band was unknown to me. That debut release, On The High Side, delivered by High Roller Records, completely slipped me by. Perhaps even more notable is that Vandallus contain members of thrash band Midnight. From Midnight, Shaun Vanek (guitars and vocals), and Steve Dukuslow (drums) hold down Vandallus as well. Rounding out the Vandallus camp is Jason Vanek (vocals, guitar), with Tyler Harvey (Deadiron) on guitar and Tim Frederick (Wretch, Eternal Legacy, Destructor) on bass respectively. With Jason Vanek in the driver’s seat, the Ohio based Hard Rock outfit prepare to unveil the sophomore effort VANDALLUS – Bad Disease through Pure Steel Records on September 28, 2018.

Admittedly, my eyes initially were drawn into this release by the front cover artwork. Let’s face it, who doesn’t love nice boobs! After a vocal countdown, “Infected” erupts from the speakers. A hard-rockin’ up-tempo ripper designed to incite soreness of the neck. Great foot tapper exhibiting the screaming vocal prowess of Jason Vanek. Things don’t slow down at all as we move into “Trash Talk’n” with its soaringly melodic vocal harmonies overlaying the riffs. Right off the first listen, I was simply loving VANDALLUS – Bad Disease by this point! In the third slot comes “Sundown Haze”. Holy shit what an infectious tune. A bit slower paced easing up on the neck, this track’s chorus rolled in my head for days after. Now totally sold all the way to the bank on VANDALLUS – Bad Disease!

“Heart Attacker” is another upbeat rocker and you can check it out in a live setting below. The less frantic pace of “Shock” flows perfectly, keeping the interest level at the ceiling while “Shake Down” has more of a rocking swagger. Each and every track is so very memorable so far, maintaining their own identity in a world where things often can sound “samey” on an album. A thundering, groovy riff opens up “Loaded”, “Vandallus” keeps it rolling exhibiting a great fist in the air concert shoutable chorus. We wrap up with the ninth and final track, “Bad Disease”. Beginning slowly, that doesn’t last too long as the record closes on another of many high points!

A simply fantastic Hard Rock album from start to finish. No over complicated thinking. No extreme amount of songs, just nine like in the old days. Very happy to have discovered Vandallus and Bad Disease and I will definitely be needing a copy of the debut, On The High Side, as well. Hopefully, when I’m at Frost & Fire Festival in early October, where Vandallus is set to appear, I will find both albums at the merch table.