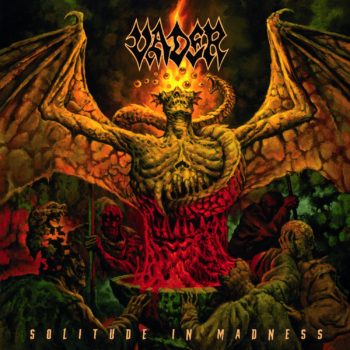 Polish band Vader are back with their twelfth album of all original material album on May 1st. The album called Solitude In Madness is 11 slabs of heavy, thrashy death metal, with each song coming in around the 3-minute mark! They do not fuck about. They come in, boot you in the bollocks then bugger off leaving you battered and bruised. Just as it should be!

For those who don’t know much about them they formed in Poland and have only the one original member still playing in singer and lead guitarist Piotr Wiwczarek. This particular line up has been together from 2110 and 2011 having released 2 previous albums altogether. This is the first new album in 4 years, a long wait, but well worth it as I will try to explain. (They did have an EP out last year, and they have another 4 albums out which are either live, covers or compilation but I am only properly counting all original studio albums)

11 Songs To Blast You Away:

They open the album with the appropriately entitled “Shock And Awe”. All guns blazing with lyrics including the line “there is no escape, no mercy here” which is as relevant to the music as it is to the lyrical creature or horror they are referring to! Although as I have said this is an aural assault they can still add subtler nuances that bring light or melody to things, such as the little guitar runs in the chorus of “Into Oblivion” which also starts with some frenetic drumming from James Stewart. “Despair” is certainly that! 1 minute 20 seconds of agility and brutality with lyrics talking about the “stench of humanity” and the “suffocating ignorance” before leaving us with a scream of “NO MORE”. Live I can only imagine the moshpits for this.

They do have one or 2 tracks that are more mid-paced like the wonderfully entitled “Incineration Of The Gods”. It starts with a more grinding riff which flows in and out of it but allows for some changes of pace with sections that are pure unadulterated thrash metal. This also features a very Neil Peart type drum section at the start.

“Sanctification Denied” will be screamed out by crowds everywhere, the ending where he growls the title is made for joining in with. Like a good number of songs it is an attack on religious hypocrisy. It is followed up by “And Satan Wept” where lyrics include “chaos, death and destruction, hate fear and violence”. You can tell as to where they lay the blame with the words “the perverse face of God”. Looking at the bad stuff that happens and knowing most of it revolves around religion, you can understand why “Satan wept”. Even though this is heavy there is quite a strong groove here making it sort of danceable (in the most metal of ways!). 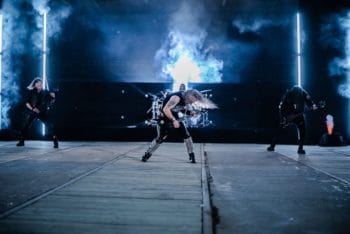 “Emptiness” made me think a little of Judas Priest or Iron Maiden. Not only its guitar work at the beginning but how it turns into a foot-stomper. Especially the riff about 2 minutes in which I particularly got off on. Lyrically he sings about a “sudden loss of hope” and makes the comment (I think it is my favourite lyric line on the album) “we don’t deserve our place in the history of time”.

“Final Declaration” is another short sharp punch in the gut. Fast as anything with lyrics spat out finishing with an “Amen” which may or may not be sarcastic. “Dancing In The Slaughterhouse” is another belter going at a fair speed and with a punk vibe whilst still having some solid grinding riffage and a crazy manic vocal at the end. “Stigma Of Divinity” is another which sticks the boot to religion and the church. I do love listening to this with headphones. The guitars chase each other through your head via each ear going back and forth. That soloing is really effective and enjoyable.

They finish with the longest track “Bones”. It starts slowly, has a bit of a nice groove before speeding up around halfway through. There is even a touch of classic rock going on in this giving more variety to the album. They finish by reminding us that “ashes, bones and dust will remain”. There is nothing else. Make the best of what we have and avoid the lies and deceit of religion. If there was a God then he has to take share of the blame for the atrocities we see on earth.

11 new songs which hit the mark, with a good clear sound due to the production, engineering and mixing of Scott Atkins (Amon Amarth, Cradle Of Filth and many others). The cover is by Wes Benscoter who has been responsible for covers by artists like Autopsy, Kreator and Cattle Decapitation. The album is out on May 1 on Nuclear Blast. I highly recommend it. If you like good quality heavy music then this is most definitely for you.