A Walk Down Memory Lane

Ugly Kid Joe return with a new album this autumn with the title Rad Wings Of Destiny, a pun on a Judas Priest album of almost the same name. Singer Whitfield Crane has never hidden his love for the Priest (and old-school metal in general) and the fact that folks where he comes from say “rad” a lot just worked for having fun title-wise.

The band are comprised of nearly all the members who were on their first recordings including their breakthrough album America’s Least Wanted back in 1991, those being on guitars both Klaus Eichstadt and Dave Fortman, bassist Cordell Crockett as well as singer Whitfield. Only the drummer from then is not here but they do have not only the drummer who has been on the last 3 albums Shannon Larkin but also the drummer from their second album Menace To Sobriety Zac Morris, so this is as close to original as possible.

Of course, the band are probably best known for their two massive hit singles “Everything About You” and their cover of Harry Chapin‘s “Cats In The Cradle” which neither folks could escape from as they were everywhere, radio, TV movies… I think it did cause a bit of a backlash and perhaps some didn’t realise what a damn fine band they were/are.

Yes they acted all daft and immature but they could write songs and they had quite a wide variation in their tastes which came out in what they did. Now they are back again (well it has been 7 years since Uglier Than They Used Ta Be) with a new album. So how does it sound? Well, let’s dig in!

Like all their output there is some variety in the songs, some rockers, ballads, funky tracks, and country songs both serious subjects and silly ones. Wisely they open with a balls-to-the-wall rocker in “That Ain’t Livin’” which comes out like an old Bon-era AC/DC track. Whitfield sings like a man possessed, or a man that would be able to cover the frontman’s job in the band these days.

There is melody here and a massive chorus to join in with. Lyrically it is quite serious (there is quite a bit of social commentary and references to mental health on the album) and seems to suggest that perhaps we should stop wondering about what life is all about, worrying how we are “getting old and going grey” and just try to enjoy ourselves as best as possible.

“Not Like The Other” has a glam vibe, it slightly made me think of Gary Glitter/Band with the hand clapping and shouts of “Hey“. (I know he is a c-word but some of that 70s glam was fucking great!). It is quite poppy with plenty of harmonies and the bass gets nicely upfront near the end of the song. The guitar interplay is also a ton of fun.

Tribute To Their Heroes

“Dead Friend’s Play” is another rocker which is an ode (mostly) to dead rock icons and how we still listen to their music and love them. Folks like Van Halen, Bonham, Hendrix and Lemmy kind of fit the bill, but the song titles by both Sabbath and Priest come from albums that most folks are still alive! I can forgive them though as it is a fun song and you can play spot the artist/song lyric throughout. Musically it is quite groovy with tribal-type drums for the verses and funkier for the chorus.

Talking funky, “Up In The City” is kind of  Skynyrd meets Stevie Wonder. and I mean KIND OF! It is quite laid back musically, almost bare, with the main guitar line making me think of the Southern rockers. The chorus kicks things up a notch and the whole band join in electrically!

The last all-out rocker is “Failure” which again tips the hat to AC/DC along with The Cult with the mid-tempo verses. Lyrically it is almost political correctness gone rocking😂 in that rather than being the macho man singing about his prowess with the ladies he is saying he is shit and a disappointment in bed… along with being, it seems, a “failure” in life in general. It is another fun track that rocks whilst turning stereotypes around for a song influenced by AC/DC. 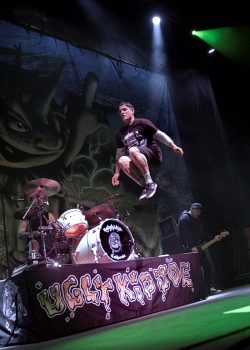 There are two songs that dip into the country scene. “Drinkin’ And Drivin’” (not a suggestion) is based around acoustic guitar and I am sure there is banjo in there as well. The lyrics go “I should have known better… I should have stayed clean” and really is an ode to stupidity and selfishness. The second verse is about “cheatin’ and lyin’“, so more regrets about past behaviour. Even the title screams “country and western” but this has edge and a message.

“Long Road” (album closer) is another acoustic with country vibes. This is sort of a song of hope, fighting either depression or at least negativity. It is a “Long road home” which on this could be literal or figurative. “Stop waiting on the sky to fall” he sings. Sometimes you have to travel a way to find who you are and what you stand for, but it is worth the journey. Yes, this is the band that gave us “Everything About You“. They were always more than that. This has a terrific anthemic chorus, actually rather uplifting… who would have guessed this in 1991?

There are a couple of acoustic ballad-style songs, both quite different from each other. First up is “Everythings Changing” which is reflective and melodic and features keys heavily at points. There is a feeling of perhaps thinking that everything is changing and it is hard to keep up, the “train is slowly leaving” but it seems faster. We shouldn’t worry about change as in reality nothing ever really changes (“but the shoes”… as The Wildhearts once sang). “Kill The Pain” is a terrific ballad, a stadium swayer in the making. The song builds nicely in intensity before dropping down right down before picking up again via a guitar solo. The song seems to be a statement of intent to stand with someone who is struggling with pain of some sort (whether physically or mentally). The melody is excellent and strong, really tasty. 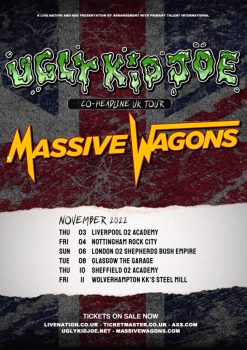 The only odd thing about the album is the cover of “Lola” by The Kinks. Now it isn’t terrible but it doesn’t really add much to the original classic. It is sung and played well but for me I think I would have liked another original song going by how good the rest is. Apparently, there is a reason behind doing it but the band isn’t saying. Part of me hopes it is to annoy transphobes! If it is then well-done guys. I am still trying to guess by the placement on the album. Of course, I could be miles out. It wouldn’t be the first time!

It might be 7 years since the last album and a whopping 30 years since their debut (bloody scary that) but they are back and with a bang. Showing perhaps more subtlety than all those years ago but still maintaining the fun and silliness in small doses they still know how to rock and entertain. Whitfield can still sing and holler (when required) and the band are tight as you would expect. Ugly Kid Joe are due to tour in the UK soon so make sure you check out the dates to come (with UK outfit Massive Wagons, they will be great shows I am sure). Excellent addition to the band’s catalogue.

Check out my other articles and reviews here.