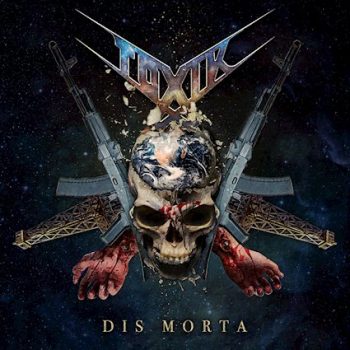 This album is the heaviest TOXIK release yet! While the group has a long lineage in a traditional thrash mould, this record expands on what’s been and shows where they can go, both musically and subjectively.

10 piledriving tracks that range from staggering breakneck BPMs to grinding odd time signatures and raspy dissonances, the character of the album reflects perfectly the band’s message and mindset.

Dis Morta is the 3rd full-length release and picks up where Think This, the band’s second album leaves off. It is a conceptual work in that the art on the cover parallels the subjects in the songs but it’s not bogged down with heavy-handed traditional concept album plaque.

It’s clean, focused, and approachable without knowing the concept, which is a much cooler delivery.

As a band, TOXIK has held onto its punk-inspired themes and dystopic views on our societies. In a world more cluttered and destabilized than ever, a message about how we got here seems more relevant than ever… and who better than the band who coined the term World Circus!

On this record, TOXIK introduce a new writing talent in Ron Iglesias alongside Josh Christian for the lyrics. Musically, all songs were written by JC and produced largely as well. The finished product included Martin Furia as co-engineer/co-producer and James DeMaria for final listening and production, which had an impact on the overall result. This is a first for the band in terms of collaboration with another producer and the band itself.

TOXIK feel, it captures both their intensity as a live act and also their ability to use dynamics and nuance that aren’t always a feature expected from this genre.

It’s an ambitious work with very little regard for tradition or even expectation…it’s honest and real.

“Power” is featured on TOXIK’s album “Dis Morta” – out on 05/08/2022 via Massacre Records – get it here ” https://lnk.to/dismortaGraphics: NecroProducer/Edit…