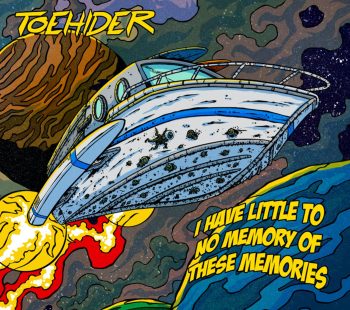 TOEHIDER – I Have Little To No Memory Of These Memories

All The History You Need:

We live in a world with Tik-Tok, something which can play excerpts of music for 45 or 46 seconds, perhaps the attention span of many folks these days. With that in mind, we come to this album, the wonderfully titled I Have Little To No Memory Of These Memories which is contrarian to these new social media outlets being as it is an album comprised of 1 song which is 47 minutes and 47 seconds long! The “band” for those who have never heard of Toehider is really one bloke called Mike Mills an Australian who has featured on albums by Ayreon, in fact on one of them he manages to make binary code sound sexy and cool (check out “The Day That The World Breaks Down” for proof). He also was involved with the band Troldhaugen, a band that we reviewed an album by HERE.

On this album he plays all instruments and provides all the voices (of which there are many) and due to that he has taken 3 years to write and record the whole thing. The idea revolves around memories, do we actually need so many, why do we remember some things not others, could we ever find extra storage space? It does this by introducing us to “a man, a woman, a huge bird, a dumb alien and 2 flying boats“. Apparently there are two different endings depending on whether you buy the CD or the vinyl. A concept album with characters and that’s rather long (some might have already switched off…) does it work? How does it compare to other concepts from through the years? Lets’ dig in and see.

A Certain Playfulness Throughout:

It opens like someone is going through the dials on a radio with noises coming in and out, which of course could just be what is happening in our mind. The vocals are very Queen meeting a barber shop quartet! There is playfulness right from the beginning, even putting an echo on the “vu” from Deja-Vu. From there it kicks into a heavier piece, all proggy with cool percussion before heading into something rather cineamatic (I was thinking Star Wars) with the strange but heavy rhythms flowing in and out. The way he has panned things so the music (and often the vocals) move between headphones/ears is an aural pleasure.

When it drops to acoustic guitar and whispered vocals it is like Jethro Tull meets Crosby Still Nash And Young. The harmonies are to die for. Of course they are layered as he does all of them. Must take ages to sing each melody then connect them together. There is also a little melody that keeps popping up regularly connecting things nicely. 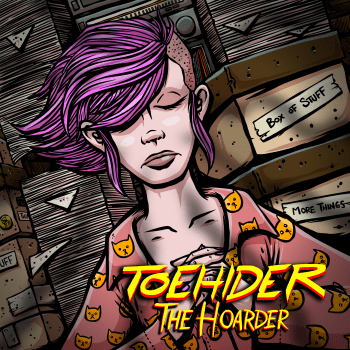 Toehider: The Hoarder, The Single!

There is a section which has been released as a single (see video below) called “The Hoarder” which is funky and cool. Lyrically it could be about the literal mess of her house or the mess in her head (or both, it works on each level) due to hoarding so much stuff. The way the voices work gives an idea of the chaos going on in her house/flat/both. The video of the song is underneath so you can see what I mean (hopefully).

From there we head into space, with story and music together having added transmission type noises as we travel, which is overtaken by a section that is very Sabbath, actually made me think of either the Dio era or indeed the Tony Martin album Headless Cross. The difference in bass styles between this section and the “single” is really interesting. On both parts the bass is up front yet he can go from funky to doomy and manage it without sounding in the least bit disjointed. Vocally at points he made me think of Devin Townsend, very theatrical yet so powerful. In moments of calm and reflection there are interuptions with big heavy sounding chords breaking through between silences, perhaps again reflecting the inner confusion of a messed up mind?

The album continues to move through different styles, I noted some Steve Rothery (Marillion) guitar stylings along with Brian May (Queen) to electronic music, upbeat  synths that could have been heard in the 80s or 90s pop music, 70s disco and again some 80s cinematic music and switching to 90s alternative with almost death metal growls going on at one point!

What is truly wonderous (stories…?) is the way the whole thing flows and makes sense despite being about confusion and clutter of mind. It could have been messy but Mike Mills has the skills and talent to pull from loads of places and arrange them in not only a quite cohesive way but one that is a bloody great deal of fun to listen to. Even the way he matches musical moods to the words and story, for example during the section where he sings about “floating steps” there is a light airy feel but the part where he warns us to “prepare for a cranium prick” (I thought he was just calling us pricks at first 😂) is heavier racing along with greater urgency. (Did I hear a hint of Styx around that part as well?) 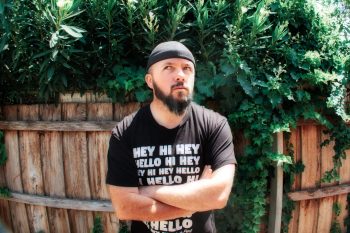 Toehider: The Man Himself, Mike Mills

A Classic In The Making?

The ending is terrific too, both the melodies and words are so joyous and almost religious  (I have the happy ending it seems) and personally I was left feeling quite uplifted and rather eager to go back and play the whole thing again (I have done quite a few times as once isn’t enough). If I was to try and compare it to prog albums of the past I would put it along with Jethro Tull‘s Thick As A Brick in that it tells a crazy story, is quite wordy in places but the way certain themes repeat or re-appear with subtle differences along with, and this is the most important point, there being a Python-esque (that being the absurb and surreal style comedy of the TV show Monty Python for anyone unaware) humour running right through it. Some of the lyric lines are very funny at times. The way that he sometimes breaks what is called the “fourth wall” by addressing the listener direct is again the kind of breaking the rules that Python would do. If this had come out in the 70s it would have been lauded for the music, playing, words and creativity and probably sold shed loads. It would be marvelous if the folks who grew up on the classics took time out to check this out and get to know it… I to be honest still am and I have been playing it constantly and raving to anyone who will listen about it… I guarantee this will become a classic for those who make the effort. Bloody marvelous!

I HAVE LITTLE TO NO MEMORY OF THESE MEMORIES: “THE HOARDER”

“I think I’m trapped!” cried the woman, surrounded by newspaper, glass bottles and magazines stacked to the roof. Bird cages. Not one, but TWO big old boats in the front yard. Tarpaulin (not weather-proofed). She does that thing with her hands that she does when she’s in an inconsolable state of panic.

CGCM Album Review, Tom CornellI Have Little To No Memory Of These Memories, Toehider