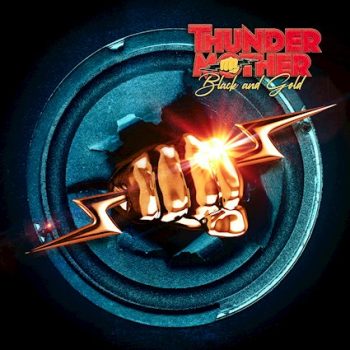 With four studio albums to date and countless awesome live shows under their belt – the latter incidentally also during the pandemic, the Swedish all-female band Thundermother has proved its outstanding artistic potential many times over. Their upcoming new release Black And Gold has these exceptionally talented musicians channel their extraordinary qualities even more purposefully and looks set to be a real landmark in their career.

Black And Gold is doubtlessly the strongest album release in Thundermother’s career up to now, featuring twelve haunting rock songs that sound as if they were cast from one and the same mould, yet come across multi-layered and varied at the same time. “In our view, every one of the songs on our new recording is a hit in its own right,” enthuses guitarist and band founder Filippa Nässil.

No doubt about it: Nässil and her three bandmates Guernica Mancini (vocals), Emlee Johansson (drums) and Mona Lindgren (bass) have continued to evolve in every respect. Filippa: “For us, it was all about taking the next step in the wake of our 2020 release Heat Wave. That’s why important adjustments were made to get to an even higher level with Black And Gold. We cut full demo versions of a total of twenty song concepts and played them to friends and colleagues so we could choose the twelve strongest tracks based on their evaluation.”

Filippa Nässil is referring to typical Thundermother numbers such as “Wasted” and “Loud And Free“, both highly infectious party rock songs with an irresistible feel-good appeal. The first single “Watch Out” belongs to the same category and – supported by a video courtesy of Stockholm’s Virtual Star Studios and shot in front of one of Europe’s largest green screens – premiered on 8 April 2022.

There are plenty of additional highlights on Black And Gold, such as the catchy groove rocker “I Don’t Know You“, a sure-fire first-rate rock radio favourite, and the title song “Black And Gold“, to which Filippa has contributed no less than four guitar tracks: “I play rhythm, solo and slide guitar and on top of that a talk box, like Bon Jovi use it. No idea how I’m supposed to get all four components under one hat live on stage,” she laughs. “Look No Hooks” oozes a particularly colourful vibe, about which Filippa says: “We loved that Sixties flair from the moment we found it!”

By contrast, “Hot Mess” is a pretty unusual track for Thundermother, which Filippa Nässil describes, tongue-in-cheek, as a “blend of Aretha Franklin and Aerosmith”, admitting that the band surprised themselves with this number. Last but not least, the ballad “Borrowed Time” has singer Guernica Mancini tell of that brief, adrenaline-fuelled moment of happiness immediately after a show before the band travels on to the next venue on the nightliner, pretty much exhausted.

Black And Gold was produced, mixed and mastered in Stockholm at the Baggpipe Studios and at Copenhagen’s Medley Studio by Søren Andersen from Denmark, who also operated the mixing desk on Heat Wave (which made number 6 in the German charts, among others).

“Our new album is definitely a positive development in every respect, both from a compositional and from a production point of view,” says Filippa Nässil, who has been studying at the London Songwriting Academy for the past few months. “Our goal this time was to only include songs that will appeal to any rock music fan, and ultimately even to my mother. We feel stronger than ever as a team. Thundermother is a rock band, we live and love rock’n’roll, we’ve already played countless concerts and will continue to play in every city where people want to listen to us. Our aim is to get to know as many new cities and countries as possible with Black And Gold!”