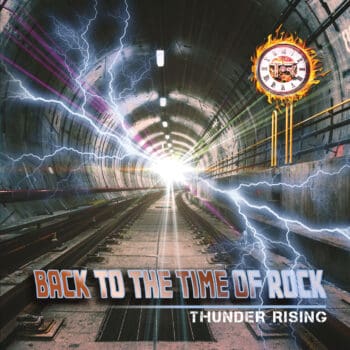 THUNDER RISING – Back to the Time of Rock

Music for the Masses is proud to announce the agreement with RTI Mediaset for the CD release of the new album by Thunder Rising, featuring well-known guitarist Frank Caruso, out on March 4th, 2022, entitled Back to the Time of Rock (In Japan Release date 31 March)

Born from the mind of the Italian guitarist Frank Caruso, known for his numerous projects such as Firehouse, Arachnes and Vivaldi Metal Project above all, superband Thunder Rising is back on the record market with a brand-new album called Back to the Time of Rock, the band’s latest studio effort.

A rocky, melodic sound, hypertechnical and exquisitely hard-rocking: this is Thunder Rising, which since their debut (featuring Mark Boals) on, have always pursued a musical dimension of their own, growing it step after step.

Back To The Time Of Rock, out on March 4th, 2022 will be their first to be released by Music For The Masses. Twelve extraordinary tracks, a real-time travel towards the re-discovery of sounds from the past but in a modern key, capable of striking and fascinating any listener.

In addition, we’d like to point out a bonus track which will only be featured on the CD version and not in the digital stores: “Stairs to the Top”.

The band is currently shooting the video clip of the first single “Fate Train” to be released in the forthcoming weeks.

The project Thunder Rising was born in 2012 from an idea by Frank Caruso and Corrado “Nail” Ciceri. The two old friends re-meet by chance after twenty years when, back in 1986, they founded their first band called Firehouse that would release two albums all over Europe. It’s during those years that they fall in love with the voice of Mark Boals, then lead singer of guitar phenomenon Y.J.Malmsteen!

After twenty years of different musical careers: Frank Caruso (in Arachnes with which he releases eight albums and Strings24 of which Frank is founder and publisher of two albums) and Corrado Ciceri (with his fifteen years with the band Wine Spirit on the most important Live Stages such as Gods Of Metal, Metal Mèan Festival, Glenn Hughes, Alvin Lee and many others and four worldwide released albums) rejoined to start a new project

I have the pleasure to tell the story of the brand new Thunder Rising album, an album born during full pandemic and in a difficult moment.

We were working on a tv production in order to make part of its soundtrack and the storyboard implemented some 70’s, almost 60’s, style tracks.

That’s when I dusted off some old Hammond voices and guitar sounds typical ol’ Fenders…..

And here’s the idea: going back, as a sign of tribute, over all that repertoire that made not just the history of rock music but, above all, it is an integral part of our musical training!

No sooner said than done, I started a reflection with my bandmates and, if the first albums represented a journey on a more American-style songwriting, this time we decided to sail new seas…

By mutual agreement with my fellas, we started writing and working hard!

The new pandemic arrival and therefore the sanitary emergency ended up blocking everyone at home, forcing us to suspend the recording sessions.

We only had half the tracks done but we couldn’t stand the waiting!

It was on March 2021 and, thanks to our editor (RTI-Mediaset), the first EP (a.k.a. Thunder Rising III) was released.

As soon as it was published, the critical consent was very positive so that we immediately came back recording the second part, released the same year (October 2021) and called The Time Machine.

The two EPs represent two different musical ages: The first turned toward the ’80 and ’90 while The Time Machine is a real going back in time to the glorious ’70 and to their primal rock roots with explicit historic-riff mentions.

It’s crucial to know that the recreation of the sounds has been possible by using real vintage instruments (guitars as well as amps) and even the digital parts have been re-elaborated keeping in mind what were the iconic equipment and tools of the past. A great deal of work has been done in researching and emulating the old sounds like Tape-Echo and Analog Mixing Consoles.

Meanwhile, on the market my early album reissues were published and, thanks to the meeting with Music For The Masses, the idea to release a new album including the previous two eps (available only in digital) took place.

Moreover, we wanted the new full-length to include some extras.

For this reason, some tracks appear in different versions (extended) but, more importantly, the ‘physical’ copy includes an exclusive new track not present on the digital one called “Stairs To The Top“.
– Frank Caruso

Upcoming ReleasesBack to the Time of Rock, Music for the Masses, Thunder Rising