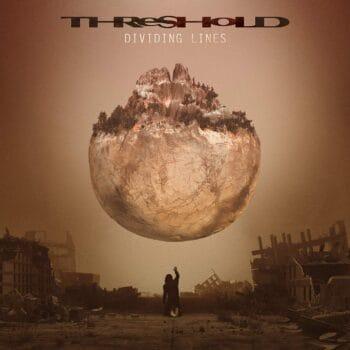 British prog rockers Threshold return with their 12th studio album Dividing Lines on Friday 18 November on Nuclear Blast Records. This is their first since 2017’s conceptual album Legends Of The Shire. The band are describing this new album as the “darker, moodier older brother” to that.

This album is shorter in length and more concise and I would say definitely heavier. The songs have an intensity throughout. Lyrically they touch on themes of alienation, the bad side of computers with online disinformation, climate change and nuclear warfare, so not a happy set of songs as such! The band remain the same from their last outing with Glynn Morgan on vocals, Karl Groom (lead guitar/backing vocals), Richard West (keys/backing vocals), Johanne James (drums) and finally Steve Anderson (bass/backing vocals). For those unaware, the band have been around since the late 80s with their debut Wounded Land coming out in ’92.

Both Karl and Richard appeared on that (Karl being an actual founding member). Glynn first joined the band in 93, but only stayed for 3 years. He returned in 2017 (strangely both times he took over from Damian Wilson). The rhythm section has been in place since the early 2000s (Johanne joined in 2000, to be followed by Steve in 2003). That is the background, what about the album?

The album is comprised of 10 songs ranging from 4 to 11 minutes and totalling just over an hour of music. Opening song “Haunted” has a thumping, pounding intro and leads with a tasty heavy riff. It calms down as the vocals enter. The band know how to change things up during a song, however they do it very nicely, nothing seems forced or indeed being done to show their chops but rather moving the story or lyrics along showing that melody is a major tool in their armoury. There are plenty of little touches that add to the track such as the bass line when the song drops to more of an acoustic vibe and the echo of the backing vocals on “I will remember” section. Even the sweet change of tempo for the solo is executed beautifully.

“Hall Of Echoes” is a look at the social media bubbles that folks can end up in where you only get to hear one point of view. Folks “build your fortress, raise up your drawbridge” so as not to hear others who might see things differently. Musically it opens with keys and synths (as do quite a few songs) leading us into another big riff before dropping down for the opening vocals. What is impressive is how catchy the damn thing is despite the lyrical theme being quite dark (actually a recurring theme on this album). The riffage at points is almost in Dream Theater territory, especially around the 4-minute mark. I rather like the use of whispered vocals, they sound almost conspiratorial and slightly worrying! Very well thought out.

“Let It Burn” kind of reminds me thematically of a song from Ozzy‘s first album called “Revelation Mother Earth” from 1981! I suppose that makes Ozzy ahead of his time with his finger on the pulse… who would have thought? On this, the lyrics go “Mother Earth pleads as she falls to her knees” and is a cry to protect the only planet we have! We have 2 options, try to make relevant changes or “Let It Burn“. I know what I would prefer! He sings how “exploitation by civilisation has come to haunt us“, and musically it goes from slower, mournful to faster, an oncoming urgency as the song continues before it becomes reflective on a beautiful guitar solo. Glynn‘s vocals are particularly good on this I feel, very powerful and dripping in emotion.

“Silenced” starts with robotic-style vocals and has heavy use of synths. Featuring a huge chorus and effects, this has a strangely commercial edge to it and you can see why on hearing it why this was the first release/single from it. Again this is perhaps focussed around the alienation felt especially online when some people feel they cannot express what they really want to, feeling pushed to the side and wanting to shout out in anger. This is a subject that can certainly present a range of views, is it OK for everybody to say what they want? Are there things that should not be said out loud or online? How do we deal with people with views we disagree with? They don’t try to answer, they are just asking the questions and making the listener think. 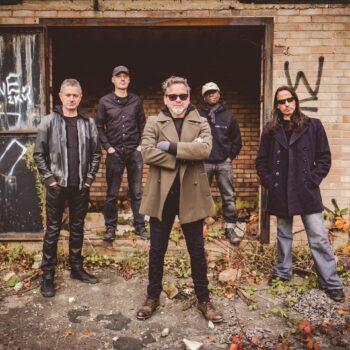 The Rhythm Section Nail It All Down

“Complex” kicks in with a heavy riff and has a guitar melody over it, and as it continues it has plenty of keys thrown into the mix. The drum fills before the mid-eight and chorus sections are terrific. The chorus is again very infectious, “you know something’s going on, but it’s so complex” he sings. The angle on this is just how much information we have at our fingertips but of course, we “can’t believe everything“. Just how do we figure out the fact from the fiction? There is some fine riffage on this with keys and guitar floating in and over the top at different points whilst the rhythm section nail the whole thing down solidly. With the various fills of keys and drums this is a hell of an entertaining track.

“King Of Nothing” hints at the cult of personality, “I followed you endlessly, faithfully, watched as you sold me a whole new world“. Musically it is rather atmospheric with the opening having a spacey vibe, but it still has some fine riffs to bang your head to. Like most songs on here there are lots of little additions, fills etc that you notice on repeat plays keeping the whole thing interesting.

“Lost Along The Way” is probably the most pop rock they get here. Strangely one of the opening guitar melody lines is very similar to the main one in Abba‘s “Lay All Your Love On Me” (OK I spent over 15 years doing hospital radio folks, I know my Abba😁) but it doesn’t hang around long! This is quite 80s, perhaps with a vibe of 90125 era Yes.

“Run” is the shortest song on the album and seems more of a personal piece possibly about parents not standing by a child when needed. “How could you walk away and sacrifice me” he asks. It is a bit lighter until the second half when it heavies up just before a short but heartfelt guitar solo. The ending is particularly good and worth waiting for.

Time For The Epics

That leaves the 2 long songs, “The Domino Effect” and “Defence Condition“. What they both have in common is there are no multiple time changes, and no feeling of cramming as much in as possible. Rather each track allows time for each section to be enjoyed as it flows into the next part. The former (“Domino Effect“) has a symphonic sound due to orchestration and parts of it could be easily fit into a Nightwish or Epica song. When it drops down to piano and vocals I did think of bands like Frost and perhaps later era Marillion. The guitar work is heading into Floyd territory (it isn’t quite that sound, but in feel and warmth it is). Keeping that texture of lilting and haunting the vocals on “put us back in our box till all our violence stops” are very impassioned.

The latter is extremely contagious with plenty of melody and feeling, which considering the subject matter is quite a feat. The song talks about various “defcoms“, the defence readiness or general alertness to war or threats by the US Armed Forces. The desperation of being “bogged down in a war of attrition” a never-ending feeling of threat or possible war being constant is really where we are in this song.

It is about the fear of what might happen and how we are manipulated by the media causing the query “tell me who to trust?”. This has another lovely guitar solo which captures the mood of the piece. There are some sound effects of voices speaking through intercoms like in a war room adding to the drama as well. This song features the only harsh vocals near the end, which are split between clean normal ones. (Imagine a non-high pitch Dani Filth…)

Threshold continue to impress both musically and lyrically. I think it was either Blue Oyster Cult or Queensryche (perhaps both?) that were called “the thinking man’s heavy metal band” and I feel this is also true of these guys. There are plenty of riffs for your buck, but also lots of melody and rather infectious choruses, yes a prog band that writes stuff to sing along with, what a fabulous idea! Metal with sophistication. Hopefully, this release will open the band up to even more people allowing more live shows (I personally would love to see them do a UK tour… including Scotland) to be arranged and filled. The album has plenty going on so each play seems to bring something else to enjoy. Excellent album by an excellent British band.

Check out my other reviews here. Tom.