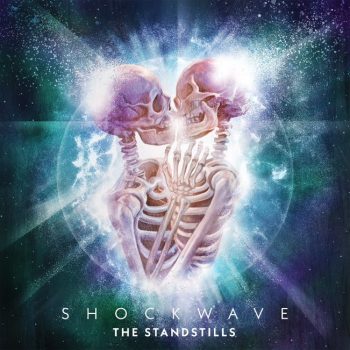 For more insight into the track and how it came together, you can watch The Standstills talk about it all with Jesse Hughes (Eagles Of Death Metal) and Neil Sanderson (Three Days Grace). Check it out here.

Further offers The Standstills’ Jonny Fox on working with Eagles of Death Metal‘s Jesse Hughes: “Renée and I spent some time in LA to get inspired to write what would eventually become our new album, Shockwave. If you are a musician and spend any significant time in Los Angeles you will run into the city’s unofficial mayor, Father Badass, Jesse Hughes. We instantly hit it off, loving similar styles of music and sharing the same outlook on creative arts. Before we knew it, we were at a Bar-B-Que at his place that turned into a full-tilt jam session in his living room that lasted a couple days.

Unfortunately, we never stopped to record any of it. Fast forward a few months to when we completed “Motherlode” with Neil Sanderson of Three Days Grace; the song reminded us of our time out West with Jesse, and it just felt natural to as him and Josh Jove to be a part of it. Without a second’s hesitation, Jesse jumped at it. He is truly one of kind, not afraid to speak his mind, and we loved that.”

Over their career, The Standstills (comprised of husband-and-wife duo, Jonny Fox, on vocals/guitar, and Renée Couture, on drums/vocals), have built a reputation for transcendent anthem-making with an earnestly steadfast formula: gigantic hooks, unapologetically hypnotic grooves, and infectious unabashedly cool riffs, which can be heard in force on Shockwave. Produced by Neil Sanderson from Three Days Grace and mixed by two-time GRAMMY Award winner Howard Benson (My Chemical Romance, Santana, Daughtry), the album blends immediately accessible choruses with magnetic layers of depth revealed in repeated listens.

The Standstills‘ signature sound first emerged on a pair of indie releases. From the Devil’s Porch, their 2015 EP, produced three successful Active Rock singles, resulting in a 2016 win for Best New Group or Solo Artist: Mainstream Rock at the Canadian Radio Music Awards, while their 2019 debut album, Badlands, produced the fastest charting Canadian single in the MNRK label’s history.

“We’ve completely opened and exposed who we are in a way that we’ve never done before,” says Fox. “It felt like the right time. We’ve always gone with our gut instincts. We felt ready to do it. This is the album we’ve been working towards. I hope it connects to people in a deep way, as much as it’s meant to us in the creation and the life experiences that it took to make the album.”

Beginning in November, after the release of Shockwave, The Standstills will embark on a Canadian arena tour with Three Days Grace. Kicking off November 8 in Vancouver, the tour will see the band make their way east with a final date in Toronto on November 27. Then in 2023, the duo will board the ShipRocked Cruise and rock passengers from Florida to Amber Cove, Half Moon Cay & Grand Turk.