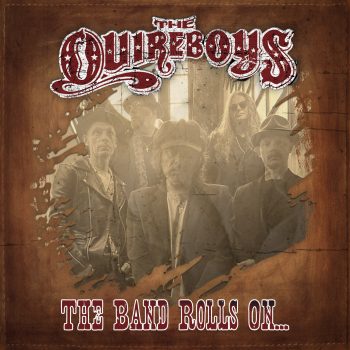 THE QUIREBOYS – The Band Rolls On

New release from: THE QUIREBOYS – The Band Rolls On (December, 2022)

As the title suggests after the recent regeneration of the band and in between a hectic tour schedule throughout the US, Sweden, Portugal, Switzerland, France, Norway & the UK, The Quireboys have been in the studio recording a 10-track studio album of brand new material featuring some All-Star collaborations.

The album which is now available on pre-sale features some well-known faces which include:

Guy Griffin says: “It’s great to have people we really respect and admire in the industry adding some of their magic to the new songs we’ve written. After twenty years of writing Quireboys songs, these collaborations have not only taken a bit of the pressure off me but brought a fresh perspective to the process, another way of looking at a song. It’s also been a pleasure to sing alongside such great names”

From the Rock n’ Rolling gospel-tinged riffs of the title song to the hypnotic groove of “So Glorious” (w/Dan Reed), this is something different but with no less swagger. Griff goes on to say: “It’s given us a real chance to explore other styles as we continue our musical journey”.

Paul Guerin added, “the new machine is fresh, tight, highly motivated and performing better than ever, we have been so excited we haven’t stopped writing new material throughout all the tours, tbh we have enough new material for 3 albums but The Band Rolls On will feature the first batch from The Quireboys.”

The Band Rolls On is now available for pre-sale on CD or vinyl via the Off Yer Rocka Record Store. There will only be a small run of 1000 vinyl available which can be secured now by clicking the link below.

We hope you enjoy listening to it as much as we’ve enjoyed making it.

The Band Rolls On.