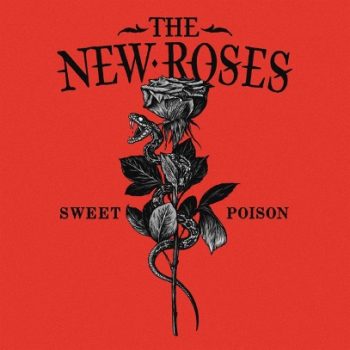 Fasten your seatbelts – THE NEW ROSES are back with their fifth studio album Sweet Poison, to be released on October 21, 2022, via Napalm Records! After their previous record, Nothing But Wild, hit the Top 10 on the German album charts, the quartet went on to share stages with rock legends like the Scorpions, Saxon and Accept. This summer, they even had the chance to tour with genre giants KISS and were the first German band invited to KISS Kruise! Sweet Poison bottles this potent energy on record, convincing with authentic hard rock and enormous hit density. THE NEW ROSES are on the way to the top of rock!

Get a taste of Sweet Poison with the first single “The Usual Suspects”, straight off the new album. Let the catchy chorus take you on an unforgettable ride on the highway of rock, while frontman Timmy Rough’s voice catapults you to new spheres. The amazing live performance shown in the official music video is just a glimpse of their latest touring experience – convince yourself and dive into the world of THE NEW ROSES.

THE NEW ROSES on the new single:

““The Usual Suspects” was one of the first songs we recorded for Sweet Poison and kind of paved the way for all the songs that came after that. We all realized that we don’t wanna write about the disappointments and struggles we had to deal with during all these lockdowns and being banned from the stage. No, “The Usual Suspects” made us look ahead, It helped not to forget what and who we are: A damn Rock’n’Roll band! The title says it all: We’re the usual suspects and our fans are the usual suspects. We haven’t changed, we’re not bitter. We’ll be back on the road and we keep on rocking right where we had to stop…“

Watch the video for “The Usual Suspects” below!

Their latest effort, Sweet Poison, opens with the guitar-driven anthem “My Kinda Crazy,” which kicks off the album in a worthy manner. In addition to rousing anthems, Sweet Poison features authentically rocking Americana tracks like “Playing With Fire” and “Sweet Gloria“. “Warpaint” is undoubtedly a massive track in which the band unleashes its intangible energy with hard guitar riffs and powerful drums, while “The Usual Suspects” and “1st Time For Everything” impress with their catchy choruses. Tracks like “Dead Of Night” build on a distinct melody and develop into strong stadium rock anthems. With songs like “All I Ever Needed“, THE NEW ROSES also show their softer side. The strong mid-tempo rock ballad revives the atmosphere of Guns N’ Roses‘ moving ballads, while frontman Timmy Rough passionately presents the full range of his voice, which can also be heard impressively on the touching acoustic track “True Love“.

Sweet Poison is an outstanding rock album with an impressive hit density, seeing the band outdo themselves again and again, reviving true 80s rock. Hold on tight, because THE NEW ROSES shift up a gear and take you on a journey to the horizon of American rock grandeur!

Timmy Rough on the new album:

“When we recorded Sweet Poison, we took all the bad vibes, all our struggle and disappointments of the last two years and turned them into this incredibly positive, high energy Rock n’ Roll album. We don’t bitch at all, we wanna move forward and take our audience along with us. We stayed on our musical path, in fact, I’d say we even went back closer to our roots and added some more of our Blues and Southern spirit while still keeping the catchy melodies of our last records. But hey, talk is cheap, so turn it up and have some fun!“

3. All I Ever Needed