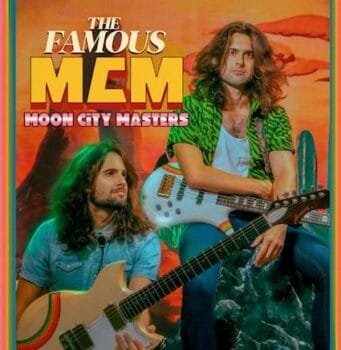 An Introduction To The “Famous”

The Moon City Masters are not only a new name to me, but they are as such a new name in rock having only formed as a band in 2019.

The band are comprised of twin brothers Jordan (bass/vocals) and Talor (guitar/vocals) Steinberg along with a producer called Justin Craig who plays the keys and drums on all but 3 songs which are performed by their drummer who plays gigs with them, Harry Keithline (songs being “Spinning Wheels“, “Send It On” and “Draw The Line“).

The brothers, from what I could find out about them, got guitars around the same time from their parents but after a short while Jordan started playing bass instead so they have been jamming since their teens. Both guys can sing (and I mean SING) and it is interesting noticing the vocal differences when they sing as individuals as opposed to how close they are when doing harmonies, and those harmonies are to die for.

The music they play is 100% 70s-influenced rock and funk. Anyone who loves what The Night Flight Orchestra do will probably dig this (although the NFO lean more toward 1980s rock). I did read somewhere (I hope it is true) that they play as a power trio due to their appreciation/love of Rush, who have sort of shown how to fill your sound when only a 3 piece.

The album has 11 songs on it, most are radio-friendly length (3 or 4 minutes a time) and strangely most of the songs have been previously released, certainly as YouTube videos. This feels like perhaps a compilation of what they have done so far before creating completely new music shortly (remembering they started just before Covid; the idea of creating music, making a video and sending it out into the ether and keeping interest up by repeating throughout lockdown sounds like genius to me).

Odd Mixes, Not A Problem

Most of the songs are quite upbeat, some quite funky and soulful with a couple of slower tracks breaking things up a little. Two of them sound very much like they could have been originally recorded by The Eagles in their heyday. “Takin’ It Back” opens things up,  and the opening riff (which repeats during the song) is reminiscent of something by The Jackson 5 before weaving its way into an Allman Bros vibe, especially around the guitar solo. It sounds an odd mix, but it works nicely. It shows they can write songs that are varied, fun and interesting. I am not sure but I think they also throw in a tribute to the Bill And Ted films by doing the widdly guitar sound from the band Wyld Stallyns, not exactly to the movie but very much of that spirit.

“Spinning Wheels” is one of 2 songs that I noted down the name The Black Crowes as a possible influence. The riff on this made me think of the song “Nebakanezer” from the Three Snakes And One Charm album. This has a very Southern feel to it and grooves along nicely. “I’ve Got A Feelin’” is the other song that I noted the Crowes, but there is also a section that made me think of Manfred Mann‘s version of “The Mighty Quinn” although that might be due to a lyrical quirk. The “oh yes’s” and “oh no’s” are there to be joined in with. There are some fine high notes sung on this song and the final lyric line is sung beautifully! 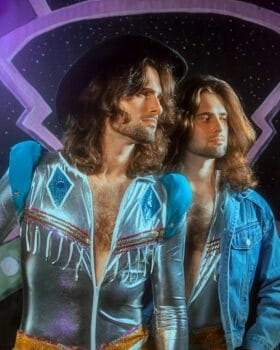 “Draw The Line” has quite a good change of pace and style between the verses and the choruses and features a lovely bridge between the two. At one point it goes almost manic country with finger-picking guitar work, just add your own “Yeehaw” for fun. Around 3 minutes 40 there is a very Alex Lifeson bit of guitar work, a line that has a certain tonal quality of the Rush guitarist. Whether it is meant or not I have no idea.

“No Warning” has such gorgeous backing vocals on the chorus. It sounds like more than 2 or 3 folks so perhaps a it is a bit layered, but it sounds wonderful. The piano or keys around the chorus add so much extra flavour to a lovely track that even has a touch of country/Americana about it at points. The bass is particularly noticeable on this track, I think the mixing in general is excellent and all the instruments have their moments to lead or at least shine.

Getting Funky With It

“Send It On” sounds like something from a lost 1970s Boston album, yes it sounds that damned good. It captures the era, has great vocal lines, the band never afraid to drop the music out to allow the harmonies to be laid bare. The drums leading into the guitar solo I particularly enjoyed. This is a track where you can really hear the differences in their voices whilst being able to enjoy their togetherness on the choruses. A really cracking song. I mentioned the bass earlier and on “Over Now” Jordan plays his fastest and possibly most funkiest stuff. Seriously the bass on this is brilliant. The chorus is another that is ridiculously catchy and good-time. There are even some hand claps in here for added pleasure (and probably for fans to join in on at gigs).

“Real Thing” is another funky rocker which has pop sensibilities. It seems to be about the joy of discovering a great new song on the radio (the album is inspired by the 70s) and I still catch the feeling now, as I get such a buzz hearing something new that excites me. You could say that is part of the reason I write, when a band move me I want to tell others.

The 2 tracks that I noted down The Eagles as an influence are “Starstruck” and “Trust Someone“. The former is acoustic-based country and sits about halfway through almost as a wee breather from the high-tempo stuff, which shows the band have actually thought about the placement of songs to try and make the album flow. The latter is for me a lovely lyrical piece about learning to trust after a failed (or maybe several failed) relationships, to put behind the disappointments and to go again. As they sing “don’t know where we are going, don’t know if it will last, can you feel the wind blowing, pushing us away from the past“. Who said “romance is dead”? 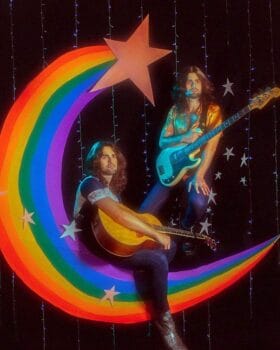 They end the album with “Where You Wanna Run To” which is quite reflective and at its root is Americana and is just so classy sounding. Growing up watching the TV show The Old Grey Whistle Test I remember hearing stuff like this and it all seemed rather exotic. I could certainly imagine presenter “Whispering“ Bob Harris waxing lyrical about this if he was still doing the show! Hard rock/Southern rock flows in and out briefly as well, although it focuses on melody and harmonies.

This is a very fine debut album from a band that have a genuine love and feel for 1970s rock music. They may not have been around at the time but they capture the essence of it all. Their playing is excellent and their vocal harmonies even better still. They can write songs that worm into the brain and are difficult to stop singing after the record is finished.

I mentioned the word “classy” earlier and that just about sums up what they and their album are.  Those who love classic rock of a bygone era along with great clear and clean vocals will I think fall in love with this. I have. They might be having fun calling the album “The Famous” but with enough luck to go with their talents, it might only be a matter of time before they are. Totally recommended!