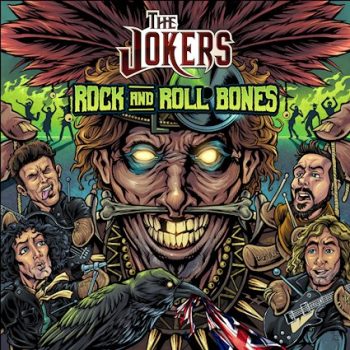 THE JOKERS – Rock And Roll Bones

Seven years after their very successful third album HURRICANE they return with their new masterpiece ROCK AND ROLL BONES! The break was the result of heavy touring, writing the new album and the pandemic! ROCK AND ROLL BONES is produced by guitarist Paul Hurst with his partner Anthony Brady, who also mixed the album! It is an album packed with glorious, fluid lead guitar licks, vivid, expressive vocals, groove-ridden bass lines and crisp, cracking drums and a lot of catchy hook lines. They sound like a healthy mix between CHICKENFOOT, AC/DC and THE BLACK CROWES.

THE JOKERS, who hail from the Northwest of England; were formed in 2006 with the aim of creating the world’s greatest rock and roll band. Their 2009 debut album THE BIG ROCK & ROLL SHOW was mixed by Mike Fraser in Vancouver straight after he had mixed AC/DC’s 10 million-plus selling BLACK ICE album. After the release, they then spent two years on the road building a substantial live following supporting the likes of HAWKWIND, Y&T, JOE ELLIOT & THE DOWN N OUTZ, ARGENT, ANVIL and FOZZY. THE JOKERS then hooked up with producer Andy Macpherson (ERIC CLAPTON, THE WHO, BARCLAY JAMES HARVEST, THE BUZZCOCKS; etc.) and began writing their second album ROCK ‘N’ ROLL IS ALIVE which was released in September 2013. Touring very hard was already their goal back then. They picked up every show they could get and made their first headlining tour in Spain with 17 shows, before playing several festivals in the UK. Their third album HURRICANE saw the light of day in 2015 followed by touring, touring, touring.

In 2018 they started to write and record ROCK AND ROLL BONES, but the start of the pandemic killed all the plans of the release. They decided to wait with the release until this was over, so after the release they can do what they do best, touring! In fall 2021 they hooked up with Metalapolis Records from Germany for a worldwide release of ROCK AND ROLL BONES. A headlining tour in Spain for September 2022 is already booked and more countries will follow!