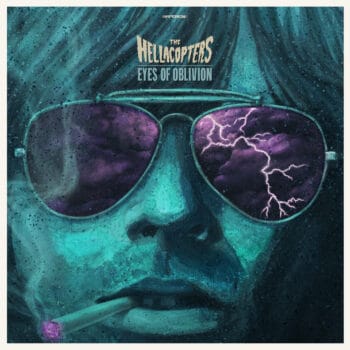 THE HELLACOPTERS – Eyes Of Oblivion

The Hellacopters for those unaware are a Swedish heavy/rock ‘n’ roll band that features members from both Backyard Babies and Entombed. The band formed back in 1994 and released 7 albums between 1996 and 2006 when they seem to take an extended break. The break lasted until they reformed for some 20th-anniversary shows for the first album in 2016. After a few years of hitting festivals, they are back with a brand new album due out on Friday, April 1 on Nuclear Blast Records called Eyes Of Oblivion.

The band comprises original members Nicke Andersson (guitar and vocals), Robert Erickson (drums), who appear on all the albums along with Dregen (guitar) who left after the first 2 albums and is back in the fold, along with Anders Lindstrom (keyboards) who has been around since the second album and finally brand new guy Dolf de Borst (bass) who is making his debut here.

In the press notes Nicke says that there are “10 songs, some dating back 10 years and some just written recently. It is rock ‘n’ roll played with high intensity. You could say it sounds like The Beatles meets Judas Priest or Skynyrd meets Ramones“. It is certainly “rock ‘n’ roll” with intensity. None of the songs are long, they punch quick and hard with a ton of melody running through them. If I had one complaint it would be that it is too short. Most of their studio albums are around the 40-minute mark and this one is the shortest at just over 34 minutes. It is a damn fine 34 minutes but I would have liked a bit more (mind I have tended to play it twice in a row when listening as once is never enough…maybe that was their cunning plan). 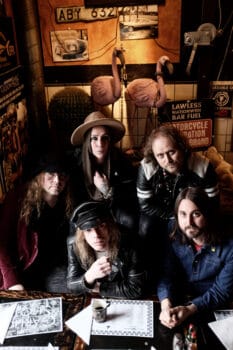 The Hellacopters: The Band (photo by Micke Sandstram)

Review Of The Songs:

3 tracks are already on YouTube including opener “Reap A Hurricane” which starts with a flurry of guitar noise before a big stuttering riff kicks in. The chorus when it comes along is infectious, big in sound and has some honky tonk piano incorporated into it. “So Sorry I Could Die” is a fantastic blues ballad with heart and soul as it pays respect to a fallen comrade in arms (and friend) Robert Dahlquist who was known as “Strings” and tragically passed away in 2017 at the age of 40 after an epileptic fit. The vocals are smokie and husky, the music dirty yet very tasteful having some haunting soloing in it. There is a Led Zep feel to the breakdown section for a few seconds as well. This is an absolute classic in the art of writing and performance which I am sure will be played for years to come where there are decent radio stations! The title song has also been aired online and is simply great catchy rock ‘n’ roll with a melodic chorus that I dare folks not to join in with. I would say it is actually impossible. It worms into your mind and soul. The fact it is so easy on the ear yet has an edge to it is proof of the band’s experience and delivery.

A Touch Of Detroit:

“Can It Wait” has such a fast start it reminded me of Motorhead, but unlike them, The Hellacopters can do something that also sounds like AOR in the chorus but by adding little guitar licks around it make the thing sound much heavier or more rocking. Clever stuff all round! “A Plow And A Doctor” opens with the line “it seems we all caught a cold” which seems about right (I started listening to the album whilst stuck in the house due to bloody Covid so it also made me laugh). There is a Detroit sound to this in places, in fact, it did remind me of the more straight-ahead Alice Cooper albums. The way the guitar sounds ominous at points whilst the piano is upbeat works nicely. I must admit I am still lost about why we need a “plow” and if anyone does please feel free to comment under the article. I might just be a bit dozy here.

Some Social Commentary With Your Rock ‘n’ Roll?:

There seems to be a theme running through 3 of the songs dealing with the internet, fame and misinformation. The music is still a rock ‘n’ roll party but the lyrics are quite thoughtful. They are not preachy as they can be interpreted in a few ways but it is still good to have some social conscience in our having a good time. First up is “Positively Not Knowing” which makes the comment that “there are ways to come together, there are ways to disagree” which perhaps is a put down on the way polarised opinions are used with people not allowing discussion. The music is faster on this having a slightly punk edge to it, the solos are great and I am sure there is some organ in the mix as well. 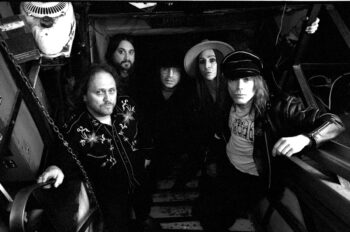 The Hellacopters:: (Photo by Micke Sandstram)

Following up are “Tin Foil Soldier” and “Beguiled“, the former having a slight AC/DC vibe at the start before heading into classic UK 70s glam rock. Think of the singles by The Sweet and you won’t be far off what we have here. The lyrics talk about how “they’re out to get you” before turning it around with “they’ll feed you fiction and lies“. As I said it is left slightly open to interpretation but at least it gets the brain thinking. This is 100% foot-stomping glam rock. The latter track is about influencers amongst other things with a lyric line saying “facts are arbitrary, the content has no use“. It is nicely sarcastic and biting. It goes on to say “the keyboard is my soul, enter my dominion and none shall be ignored“. Musically it has a 1950s rock ‘n’ roll sound guitar-wise with more honky tonk piano. It is also very contagious.

Not Afraid To Mix Things Up:

“The Pressure’s On” is a mix of 80s power pop mixed with Tom Petty And The Heartbreakers. It has more of an acoustic sound running through it. Musically is upbeat yet the lyrics are rather dark. It feels like quite a reflective piece, possibly due to thinking about recent losses in death. “We’re all gonna die, pray we get things done, from the cradle to the grave, the pressure’s on” he sings. Last song “Try Me Tonight” is a mix (wait for it) of 70s twin guitar-heavy rock and Bill Hailey And The Comets. Yes, it sounds bloody marvellous. Or at least for just over half the song as they change tack into a more sleazy glam track via a “War Pigs” sounding break down which is genius!

A Warm Welcome Back:

It may have been a long time coming (a new album) since they reformed but it is totally worth the wait. Every song pulls you in, shakes you around and then buggers off before you can get tired. The writing is stellar, the riffs are super cool, solos short and spot on and the choruses ridiculously catchy. To put it simply in case it needs repeating, this is old school rock ‘n’ roll mixed with glam rock, a hint of 70s metal and a smidgeon of punk blended expertly by a band that knows what they are doing. Welcome back!