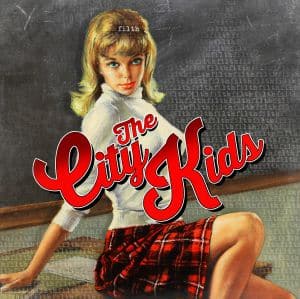 What is inspiration, exactly? You might want to ask JJ Watt, frontman of hard
rocking stalwarts The City Kids. As with a lot of bands that formed before the
lockdown, this ragged bunch of punk misfits had to close down shop, leaving their debut album Things That Never Were on the shelf.

It’s a damn shame, too, as this somewhat Leeds-based outfit had a good thing going with crackers like “Best Of You”
and “Rats” featuring their touring mates and brothers in crime The Suicide Notes.
Nevertheless, where most bands would’ve sat back and watched the clock,
waiting out lockdown was not something The City Kids were going to do. Instead,
they got back to work to bring us their killer sophomore slice of dirty rock ‘n’ roll, the
album you have in your hands now, the inimitable Filth.
Now, the jump between this one and the last is a big one, almost too big for a
band just starting out. But these are experienced cats, after all. You’ve probably seen
JJ Watt knocking about with sister band Anti-Fashion, or read his name on the
producing credits of a couple of latter-day Warrior Soul albums.

Hell, the array ofguests he pulled in for the stopgap City Kids’ EP, named after the Motorhead tunethat started it all, and consisting of covers featuring members of Nashville Pussy, The Supersuckers, Tigertailz, and Chrome Molly, should tell you something about the crowd he knocks about with.

The real diamonds were being pressed in studios in Leeds, Nottingham, Carlisle, and Copenhagen during the lockdown, though, and they make Filth shine like glitter on a pole-dancer’s stiletto heel.
“The big difference for me on this album is its far more of a collaboration as a
band,” bandleader Watt says. “The debut was a collection of demos I had for a long
time, but by the time the band came together, they were fully formed songs, so the
guys just added their shine to them. This time around, I wrote in a different way, then
we essentially jammed it out studio-wise, over the web, until they came together.”
Bringing in Andy Brook to co-produce with Watt, who had produced all their
material up until that point, was a good move, as was the addition of the mighty Dave
Draper, the man behind the megaton punch of Filth.
“With those two guys, the finished article sounds absolutely tremendous,”
Watt says. “Andy also added some additional vocals along with Frank Meyer
(Streetwalkin Cheetahs), Hoss Thompson (Thirteen Stars) and Pip Sampson (South Of Salem) as well as The Righteous Choir made up of some friends, fans, and generally lovely people. It was a great experience through and through.”
Tunes like “Scars” bash you over the head with Lemmy-inspired mayhem,
while others such as “You Wanna?” channel happy-go-lucky streetpunk with a vibe
The Wildhearts would be envious of.

There’s a lot going on lyrically, too.
“Overall, it’s a view on society from various angles,” Watt admits. “We touch
upon social media, which is something I actually dislike with a passion, because for
all the good it can do it also makes people very anti-social, and you have to decide if
their online person is the real them, or the one you know in real life. It can be
political, but not intentionally, although I think it works better if you take that
perspective.

“There are also a few tracks that are positive, about being yourself no
matter what. Songs like “It Should Have Been You” are about that feeling most people had when they were younger, or even now, going out, feeling great, and making a dogs dinner of it while watching someone else achieve what you want, but still fighting to be yourself and where you want to be.”
Despite some dark themes, there is a lot of light in Filth, albeit the kind you
see out of the slit of your eyelids waking up after a night on Sunset Strip, but it’s
there, encrusted in the punk rock anthems that are sure to take The City Kids straight to the top. Fans of dirty sing-alongs with heart, meet your new favourite band.