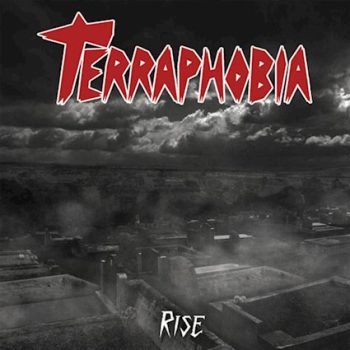 TERRAPHOBIA are a metal band hailing from the state of Victoria in Australia. Formed in 1985 by guitarist Mick Jelinic under the name of LETHAL DOSE, the band released several demos between 1985 and 1993. In 1993 the name was changed to TERRAPHOBIA and soon after the band released their first EP titled Product of Your Mind. After the departure of the previous singer, Mick was taking over the lead vocals in 1996 and in the same year the Natural Born Killer EP was released, An Eye For An Eye EP followed closely in 1997. Both releases were written, performed and produced by Mick. By late 1998 bass guitarist Suzi Reid and drummer Joe Plozza had joined the band, and soon TERRAPHOBIA were playing regularly in and around Melbourne. Enemy Within was released in July 2001, this was to be TERRAPHOBIA‘s first full-length album.

TERRAPHOBIA was put on hold in 2002 as Mick joined fellow Aussie death metallers MORTIFICATION. Mick’s stint with them lasted 11 years, appearing on 3 albums, a live DVD as well as several European tours and is also credited in writing the music for some of MORTIFICATION‘s later day classic’s such as “I’m Not your Commodity“, “Razorback“ and “Livin’ Like A Zombie“. In 2011 the wait was finally over, TERRAPHOBIA was back with a vengeance releasing the highly acclaimed album Evilution. Terrafication – The Mort Years was released in 2015, a tribute album featuring songs Mick had written the music for while in MORTIFICATION, with guest appearances from former MORTIFICATION Drummers Mike Forsberg and Damien Percy.

In 2020 Mick had started putting together riffs for a new album, as the songs progressed it became apparent that to perform the songs live TERRAPHOBIA would need a 2nd guitarist. Enter David Jelinic, Mick’s son, a perfect choice, Dave had been on a diet of metal music since a baby, listening and jamming to his father’s music at an early age. In June 2021 recording had begun for a new album. Another chapter begins in TERRAPHOBIA’s long history with a new album titled Rise set to be released later in 2022 on CD, vinyl and digital.