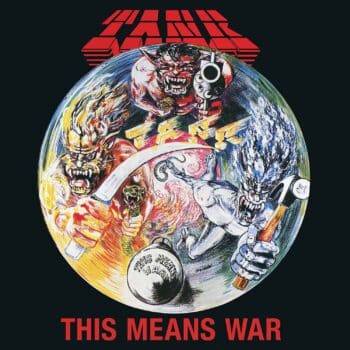 After two very successful albums for Kamaflage in 1982, Filth Hounds Of Hades and Power Of The Hunter, TANK issued their third long-player on the newly founded Music For Nations label. 1983’s This Means War came across more polished than its two predecessors, and some to this day think that it’s the best album the band has ever recorded. The songwriting itself was a bit more refined and a few compositions even featured keyboards.

“The album was certainly different,” observes drummer Mark Brabbs today. “But it still sounds like us. Mick Tucker joined the band as an additional guitarist because we wanted to get even more powerful and aggressive live. Mick’s a bit more … how can I say? His solos are rehearsed. And I think this difference comes across on the album. It’s a little bit more precise because of Mick. There’s no jamming on it, nothing is spontaneous, regarding the playing or the songwriting. Whereas before the three of us were very spontaneous. With Mick, everything was always the same. That was it. That’s the record and that’s how it is gonna be played. I am not saying that’s wrong but that’s probably why that record doesn’t sound as spontaneous as the first two. It sounds a lot more precise, rehearsed and practised. But it still has attitude, I think this comes across but … it’s a good album, I like it.”

And what about the English press back then, did they also get it? Or did they compare it to Filth Hounds Of Hades and Power Of The Hunter? “The only place where we didn’t get any good press was England,” laughs the TANK drummer, “our home country, where we were born. But they actually warmed to This Means War because it was different. You couldn’t possibly say that it was influenced by Motörhead, which they seemed to always wanna say. When the album came out, they expected to slag it off but they actually really liked it, the press, basically all over the world.”

This Means War came out on Music For Nations, so had Kamaflage gone bust by this time? “No, they were still part of the DJM conglomerate,” explains Mark Brabbs, “but I think they gave up on it. They really only wanted to sign Tank when they formed the label. But when they started to sign other bands, they didn’t do much. Bernie Tormé was great but he only got popular after he joined Gillan, not with his own band. His own band didn’t make it, although they were superb, I have seen them live a couple of times. I think DJM just wanted to wind up that particular project. DJM felt that was just enough and went straight back to their middle-of-the-road catalogue.”

Check out all our Upcoming Release announcements New release from: UGLY KID JOE – Rad Wings Of Destiny (October 21, 2022) Ugly Kid Joe are back! With Rad Wings Of Destiny – set for international release on October 21st via Metalville Records – the Californians release their first studio album in seven years! For the new songs, the […]

Check out all our Upcoming Release announcements New release from: BLACKRAIN – Untamed (November 25, 2022) Sometimes it takes a few years until a band finds that perfect sound they have in mind for their songs. For the new album Untamed by the French Sleaze Rockers BlackRain, that’s exactly the case. Although already established as a […]