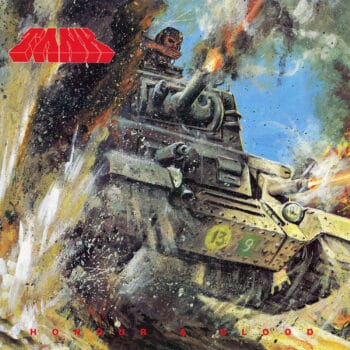 By the time TANK released their fourth album Honour And Blood in 1984, bassist/singer Algy Ward was the last remaining original member. He got in Graeme Crallan on drums and added second guitarist Cliff Evans, who teamed up with Mick Tucker. Cliff Evans explains how he met Algy Ward the first time and became a member of Tank: “In the early 1980s I was working in a guitar shop in London called Boogie Music. It wasn’t far from the famous Marquee Club which was on Wardour Street in Soho. When TANK were playing at the Marquee they would always stop by my shop to pick up guitar strings and on one occasion I sold Algy a Gibson Thunderbird bass. We became good friends and I would often join them in the pub before going to see the show. In the summer of 1984, I was playing guitar with the legendary blues band called Chicken Shack. We had a show at the Golden Lion in Fulham and during the show, I noticed that Algy and Mick Tucker were in the audience. A few days later the guys came to my shop and we went to the pub. They explained that the Brabbs brothers had left the band and they were looking for a new guitarist to replace Pete Brabbs. We stayed in the pub until they chucked us out and we got extremely drunk. That was my audition and I was now a member of TANK.”

Playing together with Algy, drummer Graeme Callan and guitarist Mick Tucker was no problem for Cliff Evans whatsoever: “I first played with the guys during the recording of the Honour And Blood album. We had already gelled together in the pub on several occasions so working together in the studio was no different. Mick played all the solos on the album. All the songs were already written and arranged by Algy and Mick. When I heard them I knew that his album was going to sound great and I was very excited to be a part of it.”

Honour And Blood kept the lengthy songs from This Means War but toned down the keyboards, whose decision was this? One could imagine that with songs like “When All Hell Freezes Over” or “Too Tired To Wait For Love” keyboards might have worked well. “Mick was more involved with the writing on Honour And Blood,” remarks the guitarist, “so the songs were more focused on the guitar riffs to make the album sound heavier. Looking back now I think a couple of the songs might have benefited from some keyboard parts but we’ve had no complaints from our fans.”

Just like the three albums before, Honour And Blood was once again put out by Music For Nations, but somehow it did not seem to work out the way everybody hoped it would this time around: “We had recorded a great album and the line up was solid and tight. We were confident that this would be the album to really raise TANK to the next level but unfortunately, our management didn’t share our vision. We had the same manager as Motörhead at that time and they would always be the main focus for promotion and investment. The label wasn’t promoting the album as much as they should have done but it was our manager’s fault for not looking after our interests.”