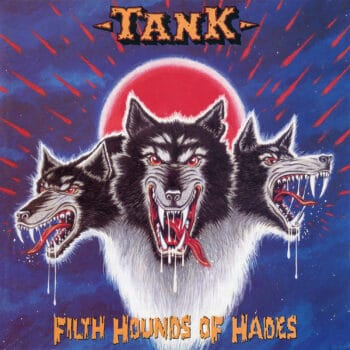 Looking at it from today’s perspective it all seems pretty clear cut. When the Brabbs brothers, Mark on drums and Peter on guitar, met up with bassist/singer Algy Ward in the spring of 1980 to form TANK, they had the vision to fuse punk and metal. It took them less than two years to become the most popular original crossover act of the early 1980s. So far, so simple. But as it’s often the case in life the truth was much more complex.

“Nothing was planned,” elaborates Mark, the younger of the two Brabbs brothers: “Peter started with music a while before me. Our parents were always very supportive. My brother, obviously being my elder brother, was into heavy rock: Led Zeppelin, Black Sabbath, and all that sort of stuff. And I started listening to his records. We both became great fans of Deep Purple, that’s probably our favourite band, for both of us. That’s how I started learning drums, from the album Made In Japan. Peter and I were both popular in local bands. Once we had a gig in a local pub. It was a sell-out. After the show we went backstage, pouring with sweat. The door burst open and there was Algy. We had never met before. Algy pointed at us, me and Pete, and said: ‘One day I am gonna be in a band with you two.’ That’s it, and he walked out. And we were like: who the hell was that? Algy was with The Saints at the time. And then he joined The Damned. And when he left The Damned, he found me and Pete.”

In contrast to speculation by the music press of the day, when TANK was formed in the spring of 1980, there was no master plan whatsoever. “To be perfectly honest, we didn’t know what we were going to do,” laughs Mark Brabbs today. “Peter and Algy used to just jam all the time, Pete and I were still living with our parents at the time. I used to go out on a Saturday night and come back on Sunday morning when my mum and dad would be having breakfast. They said to me: ‘Have a look in the garden.’ There were Pete and Algy sitting in the lounge in the garden jamming, and they had been there all night, surrounded by empty bottles of vodka and beer. And all they used to do was jam, jam, jam. So they really were the backbone of TANK because they more or less wrote the first album there and then in the garden.”

The legendary Filth Hounds Of Hades record was originally released in the spring of 1982 on Kamaflage Records. The album was produced by Fast Eddie of Motörhead fame. “Well, to be fair, Eddie really didn’t need to do much as a producer,” reminisces Mark Brabbs today. “We’d been touring England for about a year and a half with the material from the first album. And then of course we did this massive European tour with Motörhead, who we knew anyway, they were mates of us anyway. We finished the tour on Christmas eve 1981, and we were in the studio to record Filth Hounds Of Hades on December the 29th. So we were very well-rehearsed. Nothing needed production, apart from the mix.”