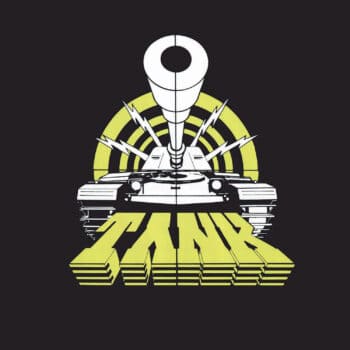 When TANK were signed on the spot by Kamaflage, the newly founded sublabel of DJM Records lost no time in putting out the debut single by Croydon’s best. “Don’t Walk Away” preceded the band’s debut album Filth Hounds Of Hades and was released to tie in with the band’s European tour supporting Motörhead in 1981.
Consequently, Germany saw the exclusive release of a 12” edition of “Don’t Walk Away” (with the non-album “Hammer On” on the B-Side as well as an alternative version of “Shellshock”), bearing the legendary slogan “Der Heavy Metal Schock” on the front cover (in addition to the tour dates).

The first pressing of the UK edition of Filth Hounds Of Hades (featuring a different colour scheme in comparison to some of the European variations) even came with a free 7” single including the non-album composition “The Snake” on the flip side.
In 1982 “Steppin’ On A Landmine” landed on the backside of the mighty “Turn Your Head Around” single.

Similar to Iron Maiden in the early days, TANK (and their record company) were giving their fans value for money, placing unreleased high-quality material on the B-Sides of their singles. “Funnily enough,” explains drummer Mark Brabbs, “the thing with “Steppin’ On A Landmine” was, we did the European tour with Motörhead and we opened up the set with “Shellshock” and then went straight into “Steppin’ On A Landmine”. And it used to get the crowd jumping up and down. It’s got that Maidenish style of riff. But when we recorded it, it was really disappointing. We felt it didn’t have the energy of the live version. So it didn’t make the cut for the first album.”

“Hammer On”, featured on the band’s debut single, did not make the cut for Filth Hounds Of Hades either. Mark Brabbs: “Hammer On” is a really good song. But for the album it was that one or “Struck By Lightning”. And to be perfectly honest, I’d have preferred “Hammer On” but I think Peter and Algy got the vote on that. But again, we used to play both songs live all the time.”
And what about “The Snake”, which was the B-Side of the free 7” single given away with the initial UK pressing of Filth Hounds Of Hades? “Yeah, again, we loved that as well,” states Mark Brabbs. “We used to do it as an encore. So it was part of the live set. That was one of Algy’s favourites. “Filth Bitch Boogie”, which ended up on the backside of the “Crazy Horses” single, taken off the Power Of The Hunter album, was just a jam, a good laugh in the studio.”
So if you look back, over twelve or 15 months TANK wrote between 15 and 20 first-class songs … “Yeah, it was quite prolific, really,” concludes Mark Brabbs today. “We weren’t a studio band as such. If we weren’t in the studio, we would be out partying, we were young guys. We were a gigging band rather. The studio was a bit of a bore for us.”