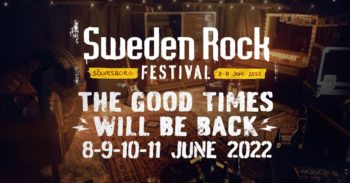 Despite all the preparations and hopes, it is now clear that there are no opportunities to carry out the Sweden Rock Festival this year either. Instead, we are now shifting our focus to 2022 and look forward to a more memorable festival than ever. We long to finally be able to fill our now expanded and upgraded festival area with awesome artists, activities and visitors.

All tickets will now automatically be valid for the 2022 festival. For those who wish, there will of course also be the opportunity for redemption.

The work of moving over as many of the booked bands as possible by 2022 is underway and we promise that the dignity of the festival will be at least at the same level as it was intended this year. The first clear documents will be presented shortly.

In conclusion, we want to thank our festival visitors for all the pep that they continuously give us in the Sweden Rock organization in various ways. We miss them and to be able to carry out the festival something enormous, and now we look forward to unforgettable days in Norje on June 8-11, 2022.

Sweden Rock is Scandinavia’s largest hard rock festival. Every year, visitors from about 50 countries are attracted to Sölvesborg, where they are invited to over 80 concerts in a mix of classic rock, hard rock, southern rock and metal. Sweden Rock is known for maintaining a high level of service, and the friendly atmosphere has become one of the festival’s main hallmarks. In addition to the annual festival, Sweden Rock now has a magazine, drinks and lifestyle products collected under its brand.