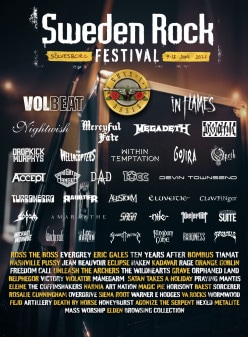 Today we have the pleasure to present 82 of a total of 89 acts before Sweden Rock Festival 2021.

We are of course fully aware that there is a risk that the ongoing pandemic will also affect next summer’s events, while there are still many months left and a lot can happen in the meantime.

A large majority of Sweden Rock Festival‘s visitors from 2020 chose to keep their tickets until 2021, and with them in mind, we have the pleasure today to tell you about as many as 82 ready-made bands for 2021!

The list shows a lot that is recognizable from the 2020 planned line-up, but also some exciting new additions.

Guns N’ Roses have already been confirmed, and the bands we present today are:

Under the current circumstances – and since so many have already chosen to keep their tickets – we have decided to wait to release more tickets until we know more about the conditions that apply next summer.

Sweden Rock is Scandinavia’s largest hard rock festival. Every year, visitors from around 60 countries are attracted to Sölvesborg, where they are offered almost 90 concerts in a mix of classic rock, hard rock, southern rock and metal. Sweden Rock is known for maintaining a high level of service, and the friendly atmosphere has become one of the festival’s main hallmarks. In addition to the annual festival, Sweden Rock now has a magazine, drinks and lifestyle products collected under its brand.