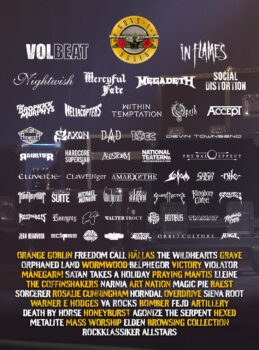 About a year ago Apologize4Nothing says “Hey Mom!  We should go to Sweden Rock Festival for our birthdays.”  I said, “Yes we should” and the ball started rolling.  360ish days later, we arrived in beautiful Solvesborg, Sweden to celebrate with about 40,000 other rock n’ roll fans.

VIP was well run and efficient and in minutes we had our VIP hoodies, all-important cloth bracelets and our lanyard that would dictate the who, what, where, whens, whys and hows of our next four days.  Apologize4Nothing and I had each picked our favorites and entered them into the Sweden Rockfest App, so we got alerts 15 minutes before each set.

My must-sees were Eclipse, Nestor and Hardcore Superstar.  Apologize4Nothing had Violator, Artillery and Nile on his list.

Walking in on Wednesday was mind-blowing and overwhelming.  We’ve been to festivals before, but not even our very knowledgeable friends could prepare us for just how HUGE it is.  There were so many people and that was just the first day.  The “light’ day!

We spent most of Wednesday, orienting ourselves.  We saw a few bands and walked (A LOT) and met so many really, really nice people.  Wednesday was just kind of a “Wow, we are here.  Let’s soak it all in” kind of day.

We rushed to get there to see Eclipse, who had an unfortunate early start time of 12:15pm.  The line to get in was bigger than the day before, but the folks at the VIP gate got us through, quickly.  We were able to get to the rail for Eclipse. 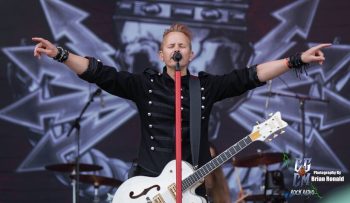 Eclipse are a must-see for me.  They always put on an excellent show.  SRF was no exception.  They hit the stage opening up with “Roses on Your Grave” and by the crowd’s response, you wouldn’t have thought that most of them had just rolled out of bed, nursing hangovers.  Eclipse brought much needed energy to the afternoon and by the time they were done we were charged up and ready for the rest of the day.  They played 12 amazing songs including one of my favorites “Black Rain” and ended with “Viva La Victoria.”  It was a fantastic way to start our day.

Next up was checking out the Cylinda tent.  Or as I started calling it “the little tent with big talent”!  I wish I would’ve known about this cool, little acoustic show tent the day before, but so happy I got to see the bands I did see there.

Velveteen Queen was the Thursday show.  They started out with two covers, one of which was “Mama Kin”.  I say it was the GnR version, others say Aerosmith but either way it was fantastic and fun.  They went on to do a full set, which included their two singles “Trauma” and “Last Sensation”.  They give off an 80’s rock vibe and have a raw/sleazy feel to their songs.  I’m very happy I caught their set.  I look forward to hearing more by them in the near future. 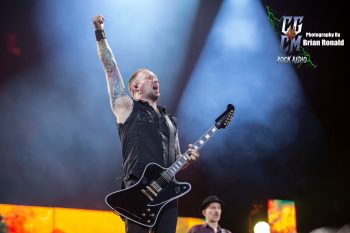 We ended up our night with a little Volbeat and a lot of shopping in the huge tent vender mall outside the main entrance.

Our light day.  We actually got to sleep in some and just take it easy in the early afternoon.

I headed over to the Cylinda tent to see Captain Black Beard.  Once again, I was highly impressed.  Captain Black Beard is a 5-piece melodic rock band from Sweden.  They opened with their stunning new single “Flamenco” and I was instantly hooked.  They commented that they don’t usually do all acoustic sets, but they sounded fantastic acoustic.  They had an energy about them. I could tell that they aren’t used to sitting still on stage.  I’d love to see a full electric set by them to see all that energy come out.  They did 10 original songs, including a new one that they hadn’t released yet.  I liked them so much that I immediately added them to my Spotify.  I’m glad that SRF has that tent.  I really enjoyed the talent we saw there.

Violator was up next.  Here’s what Apologize4Nothing has to say about them:

This band definitely deserves more attention.  When I saw them at SRF they were all around great!  From what I saw the crowd loved them and I loved the classic sound.  I would see them again if they went on tour.  “Futurephobia” and “False Messiah” are two of my favourites that they played.  I was happily surprised by the number of people who came to see them instead of one of the bigger bands playing at the same time.

Spent the rest of Friday in the VIP sanctuary, meeting new friends and chatting with old ones.  It was a great night.

Saturday:  Is it really over?

Back at the fest at 11am for our CGCM photo and for Artillery’s very early 11:30am set.

Artillery has the classic thrash/death feel that I’ve always loved.  Seeing them live, they sounded just as good, if not better than digital.  The crowd seemed to love them.  I wish they could have played later in the day, but that’s not their choice.  I’d see them again if I get a chance. 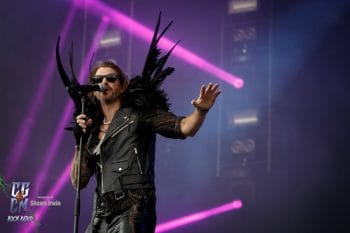 Then it was time to head to the rail for Nestor.  A huge crowd showed up for them.  I head it was the largest ever for the Sweden Stage.  Nestor are a newish band (actually an older band coming back after a few decades) who are creating quite a buzz.  They played two shows on the Monsters of Rock Cruise in February.  I saw both of those sets and was highly impressed and very excited to see them again.  They definitely did not disappoint.  This show was flashier than their MORC shows, they even had pyrotechnics!  They played all of the favourites and had the crowd singing along.  I especially loved hearing the new single “Signed in Blood”.  Nestor is exploding in popularity and are a “must-see” live.

After Nestor, it was time to prepare for Hardcore Superstar on the Festival Stage.  I got there 2 hours and 45 minutes early to secure a spot on the rail.  It worked out well because I could watch the Night Ranger set from where I stood. 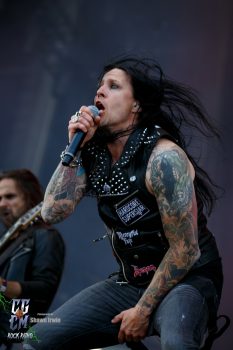 And then it was time to for Hardcore Superstar to take the stage.  This is the hardest review to write because I’m just not sure I have the words to describe how amazing this epic performance was.  Actually, epic isn’t even a big enough word.  They exploded onto the stage with “Catch Me if You Can” and kept up the energy song after song.  Jocke was all over the stage and in the massive crowd and the band was just pure energy.  The sea of people were elated and LOUD!  There were so many people. At one point I looked behind me and just went “Holy Shit”.  It was incredible!  They did six songs off their fantastic new album Abrakadabra, along with fan favourites “Moonshine”, “Above the Law” and of course, “Last Call for Alcohol”.  They ended the show with their huge anthem “You Can’t Kill My Rock ‘n Roll” leaving us all sad that it was over, thrilled that it happened and wondering how on earth Guns N Roses could top that?  Long story short they couldn’t and didn’t.  Hardcore Superstar was THE band to see at SRF.

That’s it!  Our very first Sweden Rock Fest is in the books.  What a fantastic, well-run festival with excellent bands.  It was our first but will not be our last and 100% worth travelling from the US for.

You can find the Collective List as well as all our Best of 2022 content including contributors’ individual lists, podcasts and radio DJ shows here: CGCM’s Best of 2022 (Year in Review) BEST OF 2022 – Kryfar (Writer) 🇺🇸 Yes!!  I finally get to do my Top 10!  I’ve been looking forward to this since I started writing for […]