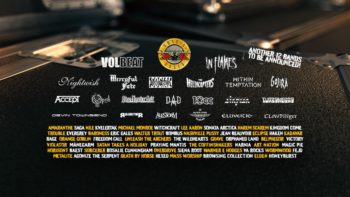 Swedish band The Hellacopters is one of the 12 bands that Sweden Rock presents today.

Today we can present the following twelve new additions to this summer’s artist field:

One of Sweden’s biggest rock bands, The Hellacopters, reunited for SRF 2016 and now returns to Sölvesborg at public request. So does the classic ’70s band 10cc, which is behind hits such as “I’m Not in Love”, “Dreadlock Holiday”, “The Things We Do for Love” with many more and which were recently the subject of an interesting documentary which available on SVT Play.

A further 12 acts remain to be presented.

Sweden Rock is Scandinavia’s largest hard rock festival. Every year, visitors from about 50 countries are attracted to Sölvesborg, where they are offered 90 concerts in a mix of classic rock, hard rock, southern state rock and metal. Sweden Rock is known for maintaining a high level of service, and the friendly atmosphere has become one of the festival’s main signature. In addition to the annual festival, Sweden Rock now has a magazine, drinks and lifestyle products gathered under its brand.