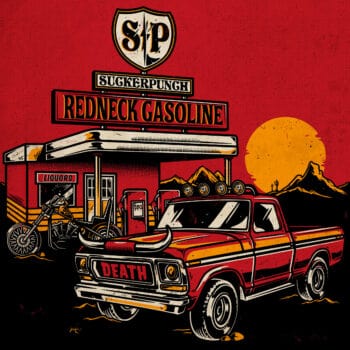 This is the second album from Danish classic act rock n’ rollers Suckerpunch. This time around they have taken it up a notch or two! The album stays true to the roots of the band and can perhaps best be described as some good old Redneck Boogie Rock played by some good old friends!

Back in 2018, the band released its first full-length album and with this release, it feels like Suckerpunch chose to put it into 2nd gear. Redneck Gasoline is recorded at CB studios by Christian Bonde and the result is an album with 10 hard-hitting rock songs each with a story of its own to tell. The band however do not take themselves more seriously than what the titles of the songs suggest. Suckerpunch has both barrels aimed at the audience who remembers when this style of music was in demand. The boys don’t try to come across as something they are not – they stay true to their own self – classic southern-inspired rock n’ roll. Nothing more – Nothing less!

We hope you can find time to listen to our new album and hopefully pass some words along the way. Redneck Gasoline is out on your chosen digital platform March 4th 2022.