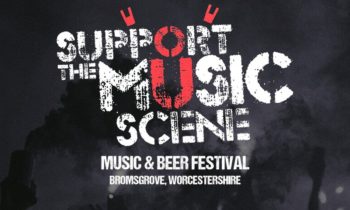 With everything starting to get back to normal in the music scene, music promoters STMS Group have launched a brand new festival for August 2022 called STMS Fest featuring a host of bands from all parts of the rock scene.

The team have a wealth of knowledge and experience in the music industry and have been carefully hand picking a great selection of bands. Not only that, the first of the 3 days of the festival is also International Beer Day and therefore this will not only be a music weekend but will incorporate a beer festival too with guest beers & ales both local and International.

Friday sees Cambridge rockers 4th Labyrinth open the festival, following on from them will be folk-rock band Cadence Noir. Sub-headlining the first night will be local hard rockers, White Tyger, before former AC/DC drummer Chris Slade takes the stage for a 2-hour musical roller coaster through 50 years of his career as The Chris Slade Timeline. Chris has been a part of a whole host of bands including Tom Jones, Manfred Mann’s Earth Band, Michael Schenker Group, Gary Numan, David Gilmour, Asia, Paul Rodgers, Uriah Heep and of course 2 big spells with one of the greatest bands of rock, AC/DC. 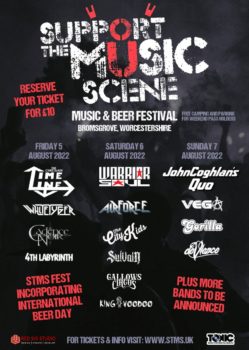 Saturday includes some amazing bands too. King Voodoo open the day’s proceedings followed by Gallows Circus and Sulvain. As the evening approaches supergroup The City Kids give us a taste of something from the rock and punk scene before we take a step back in time to the new wave of British heavy metal band Airforce who give us a real blast of early rock and metal. Some will recognize the drummer from early Maiden days too as Doug Sampson takes the sticks. The evening is rounded off with American hard rock band Warrior Soul fronted by Kory Clarke. With 14 albums in their discography, fans will be treated to some old classics as well as songs from their 2020 album Cocaine and Other Good Stuff.

Sunday promises to be one hell of an end to the 3 day weekend. Devience is a London-based rock band fronted by former (2018) X-Factor finalist Gio Spano. A superb trio steps up to give us a bit of a taste of Motorhead, Hawkwind and Led Zeppelin in the form of the band Gorilla. Going local is a band that have travelled and toured the globe quite impressively including Japan, USA, Philippines and most of Europe but never so close to home as this sub-headline slot. It’ll be a much loved welcome home to the band that started in 2009 as we welcome Vega to the stage!

The finale of the first STMS Festival had to be one with a bang. When you talk about the rock n roll hall of fame, you’d be hard pushed not to include Status Quo. Now, bringing Quo to the festival was not going to happen but the next best thing has. John Coghlan joined the band in 1963 and had a 20-year spell with the band performing drums on the first 14 albums. The original drummer and a founder member of one of the country’s greatest rock n roll bands started John Coghlan’s Quo in the 1990s and plays classic tracks in his band’s set. Expect to hear hits including “Down Down“, “Paper Plane” and “Roll Over Lay Down” amongst other great songs.

On top of the 3 days of music and beer, we will also be inviting and supporting a charity called Tonic Music For Mental Health. The charity is based in Portsmouth and their mission is to raise mental health awareness, challenge stigma and promote mental wellbeing through music and the arts. The charity turns 10 years old next year and we have invited them to come along to the festival and set up workshops, host a safe space and we may also be hearing from their ska choir over the weekend too. Check out their website at www.tonicmusic.co.uk to find out more about this amazing charity.

Founder of the charity Steph Langan, spoke to the STMS team and said “After such a long period without live music, we cannot wait to get involved with Support the Music Scene Festival with our pop up stand and area where you will find information about our free Tonic Rider programme of mental health and wellbeing training, music workshops and courses. Jay and the team share a common ethos as Tonic and we look forward to spending more time with the team and all of you in a field next August. Big thanks for the invite and support.”

There will also be a whole host of traders and food stalls, a great range of drinks and other fringe activities.

The first STMS Fest takes place Friday 5th to Sunday 7th August 2022 at Stoke Prior Sports & Country Club, Bromsgrove, Worcestershire. Tickets are on sale now with early bird discounts including free camping and free parking. There is also a deposit scheme where you can reserve your ticket for just £10 and pay the balance next year (at the early bird price too!). Go to www.stms.uk for information and tickets.

More about STMS: New App For Your Phone

To download the app you can simply go to this link https://linktr.ee/stms