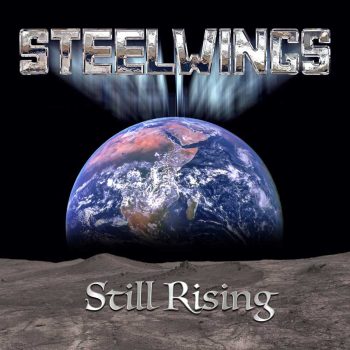 STEELWINGS play classic hard rock/heavy metal with roots firmly from the eighties. They were formed in 1982 and were part of the FWOSHM (First Wave Of Swedish Heavy Metal) The band played a lot of shows during this time and the music was mainly spread by tape-trading. In 1983 the band went to England and recorded two songs, the song “Live Your Life” is featured on their Metal Plated compilation album. They also appeared on the charity record Swedish Metal Aid, together with other Swedish heavy rock bands such as Europe, Treat and Heavy Load. The last album before their hiatus – Steelwings – was released on LP and CD in 1989.

Mike Amott of Arch Enemy, who saw STEELWINGS as a young kid back in the mid-’80s, stated: “They were the real thing, all dressed up and with big lights and homemade pyrotechnics!”.

In 2007 the new era for STEELWINGS began, when the band was asked to perform on the 700 years anniversary festival of the city of Markaryd.

2019 STEELWINGS released their comeback album Back, on CD and red vinyl. The album was well-received and put the band back on the hard rock map.

After a long band history, STEELWINGS now have joined forces with Pure Steel Records for the worldwide release of their strong new album called Still Rising.

2. Stand Up And Fight