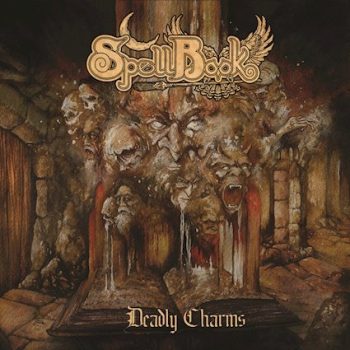 Metal That Remembers To Swing

Spellbook release their second album Deadly Charms on 23 September on Cruz Del Sur  Music. The band are obviously massive fans of 70s Black Sabbath and unlike many bands that also are, these guys noticed that in Bill Ward, early Sabbath had swing and groove. Yes, they have riffs, guitar solos, etc but they capture the musical movement. For that I applaud them.

The band are comprised of singer Nate Tyson, Seibert Lowe Jnr on bass, drummer Nick Zinn and 2 brand new guitarists in Les Yarde and Patrick “Patty” Benton. Their first album Magick & Mischief was more fantasy fiction whereas this time they have gone full occult and horror stories, some of which are based on real events. The album comprises of 9 tracks with the opener being a short musical intro (something a lot of bands seem to be doing these days). The other 8 vary between 3 and 7 minutes giving us a run of about 40 minutes which is a sensible length of time. No filler just the best songs they could write on the subjects chosen.

The album artwork is by David Thierree (Behemoth/Ihsahn amongst others) and depicts “an open spell book spewing forth witches, devils and ghastly things” according to drummer Nick Zinn.

A Look At The Songs

As stated, the opening track “1928” is a short musical piece in which the title has nothing to do with Dream Theater and their magnum opus “Scenes From A Memory” but rather is an intro to the second song “Rehmeyer’s Hollow” which is based on a true story from that year in Pennsylvania.

The intro is creepy (would blend in with a decent horror movie easily) and when the main track kicks in there is a funky groove and immediately you are back in the 1970s with the vocals being very early Ozzy.

The lyrics tell the story of the lead-up and murder of Nelson Reymeyer by a mob led by John Blymire who had been convinced by a local witch woman Nellie Noll that his spate of bad luck was due to a hex put on him from a book of spells Nelson had used on him. Believing he had to get the book they attacked his house.

They murdered and mutilated him. When they failed to find the book they tried to burn the house down… unsuccessfully! It still stands to this day. The song has lyrics about “send him straight to hell” which seems to be pretty accurate. When the music drops down it is beautifully atmospheric with slow ominous bass lines. An excellent start all round.

“Goddess” speeds the album up a bit, there is more urgency, pacier on the verses whilst the chorus shows they can write a good quality commercial chorus for radio airplay. There is good spacing, with lots of little stop and start moments allowing all the instruments to be heard properly. I quite like the drum and bass section leading to the vocals coming back in followed by one guitar at a time in each ear.

“Pandemonium” has an opening bass line which made me think of “Robin Hood, Robin Hood riding through the glen“. It is not quite that but it made me think of it. Maybe it is an age thing😂. The bass growls in the way that Geddy Lee makes it, especially in the live version of “By-Tor And The Snow-Dog“. Sounds brilliant, quite dirty and powerful.  A “Pandemon” is a very scary person and they try to scare us on this. Lyrically he sings about being “more powerful than God” and again this has that groove that will get heads and feet moving. 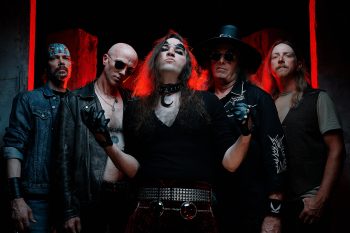 “Her Spectral Armies” is one of the best tracks on the album. It opens with what sounds like a female vocalist but it could perhaps be the lead singer (if so he has a bigger range than first thought). Slower, doomier with the bass where it should be, up the front. In its quietest moments, it features gentle guitar and deft touches of cymbal with the bass adding to the melancholic mood. Strangely at points, it is quite jaunty and proggy as well. I thought of some of the neo-prog from the 80s in the guitar work. There are also moments of duel guitar ala Judas Priest or Thin Lizzy but not at the expense of the doom elements. There is some fine shredding guitar work here as well. The chorus is utterly infectious making it a fun listen all round.

“The Witch Of Ridley Creek” is another based on a true story, this time about Margaret Mattson who along with another woman was tried for witchcraft but somehow managed to be acquitted (not something that often happened at the time). She was found guilty of “having a reputation as a witch but not of bewitching animals” which is an odd decision. This happened in 1683 in (again) Pennsylvania. The song is another faster track but is so easy on the ear it makes a great single (see video below).

The use of space in the mix helps greatly and it isn’t all coming through the headphones or speakers at the same level which is great. This is a thing not enough bands do in my view these days. When you listen to 70s and even 80s rock there is a feeling of adventure in the sound and this has that vibe.

It sounds very authentic to the era they obviously are fans of. “Deadly Charms” the title track has a single guitar line in one ear/speaker followed by a thumping beat and morphs into the groove of the song itself. Again there is nice spacing, little gaps of silence before a guitar chord, drum beat, or vocal line. This is quite doomy yet very easy on the ear.

There are plenty of little drum fills around the guitar soloing which sound great. As for the riff around the 3-and-a-half-minute mark, total early Sabbath.

The longest song on the album, “Night Of The Doppleganger” or as it is sung (and boy I want to scream it live with them) “night of the dopplegangaaaaaaaa“. Some fine riffage on this along with great drum fills again. It has a bit of Iron Maiden guitar work at one point (when it drops into a very eerie mode) and the song reminded me of the first Angelwitch album (praise indeed). The solos go from side to side through the headphones or speakers depending on how you listen and is quite hypnotic. Bloody wonderful track. If you love heavy metal and doom you will love this song especially.

The album concludes with a slightly gothic-tinged prog song called “Out For Blood” where the guitar work has a neo-prog vibe about it. Still, it rocks and the chorus is pure pop! It is a ghostly/vampire love song that eventually fades into keys. Slightly different to the rest of the album, maybe a hint of a change for the next album?

Now, Did I Mention It Swings

40 minutes of old-school bloody heavy metal tinged with doom which grooves and swings. Musically well played and presented with a singer who has a great voice for this sort of music. Plenty of riffage but all the time they never lose sight of melody and hooks. If someone had given me this and said it was a lost album from 1973 or 74 I would have totally believed them. I can give no higher praise than that. If you like 70s rock and metal then this is 100% for you. Oh, and did I mention it SWINGS?