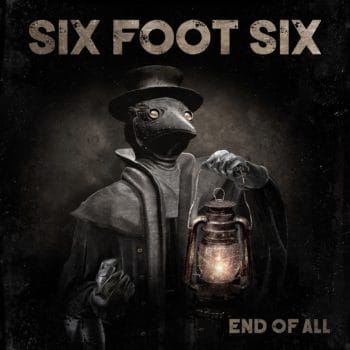 SIX FOOT SIX – End of All

Check out all our Upcoming Release announcements.

Long-time friends Kristoffer Göbel and Christoffer Borg decided to put the band together while mixing the first album The Six Foot Six Project, in 2018. Göbel recorded it as a solo effort, but a real, tight and hungry band emerged in the process. Two years later, Six Foot Six are going to leave a mark in the international heavy metal scene with their new and exciting record. End of All is a powerful collection of songs that showcases all the various faces of Six Foot Six: the melodic side, the epic side, even the dark side.
Led by Göbel’s amazing, pristine and charismatic voice, the Swedish quartet will take you to a breathtaking metal journey based on the pillars of this genre, but with a modern sound and a very contemporary feeling. It’s the end of all, indeed, and the real beginning of something unique and captivating…

– Sophomore record for one of the most promising newcomers of the Swedish heavy metal scene
– Founder, leader and vocalist Kristoffer Göbel is the former Falconer frontman (2003-2005)
– Produced, mixed and engineered by Christoffer Borg; co-produced and co-mixed by Kristoffer Göbel at Top Floor Studios and Far Beyond Productions (Gothenburg)
– Artwork by Stan W. Decker (DragonForce, Rage, Primal Fear)
– First edition will be released in a 6-panel digipack
– For fans of Black Sabbath, Iron Maiden, Judas Priest, Manowar, Helloween, Accept, Queensrÿche, Europe.