Hello, my name is Shawn “Animalize” Irwin and I am a musicaholic. Yes, I have a problem with always wanting to listen to music and buy CDs. It all started way back in the 1970’s purchasing records mostly of ELO, and I will admit it, Abba!

It wasn’t till 1983 when I found heavy metal and saw the video for Judas Priest‘s “Love Bites”. This song changed my musical taste. Soon to find Ozzy, Def Leppard and so many more. The one that hit me hard was KISS. I became a KISS fanatic. I bought all their LPs, posters, buttons and whatever else I could find of KISS. This is where I got my nickname “Animalize”, which is KISS’ album from 1984. I lived and breathed KISS and studied all their history. Schoolwork took a back burner for my KISS addiction and so many other bands. Since my very first concert, I have seen KISS 17 times and an overall total of 561 concerts of 322 different artists (setlist.fm).

My first concert was August 31st, 1985 at the CNE in Toronto when I got to witness the late Ronnie James Dio with Rough Cutt and Helix opening. Surprisingly, it wasn’t a KISS concert, but this first one got me hooked on a lifetime of concert addiction. 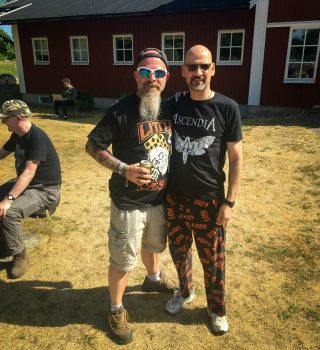 The 1990s were not easy with the grunge scene, so I looked to Europe where the music scene continued to produce some amazing hard rock bands.

In 1998 I started selling on eBay and became a successful power seller with mostly selling rock ‘n’ roll memorabilia. Slowing down on concerts through the late ’90s till around 2013. In 2014 I went on my first Monsters of Rock Cruise and the last FireFest in Nottingham England.

After meeting Rich “The Meister” Dillon in 2014 who eventually inspired me in 2015 to start writing and photographing for Decibel Geek, in 2016 I started a 4-year run going to Sweden Rock Festival. It’s been amazing with taking photos, writing, and interviews while across seas.

2019 has seen me team up with CGCM Podcast as a photographer and writer.

It has been an awesome journey and I’m looking forward to continuing in the music field I so love. My regular career selling Chevrolet & Cadillac since 2005 has helped me with my music addiction.

Furthermore, check out all my reviews: Shawn’s Archives