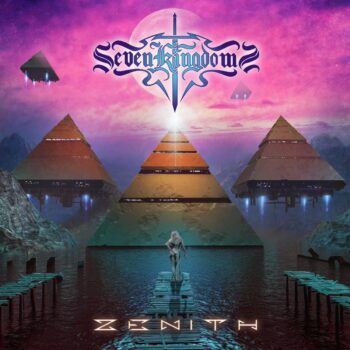 Seven Kingdoms have released the first single, “Universal Terrestrial”, from their upcoming full-length album Zenith. The music video for “Universal Terrestrial” was filmed during the crowdfunding campaign, which raised over $50,000 on Kickstarter. Zenith will see a June 17th, 2022 via Distortion Music Group.

7K guitarist Camden Cruz says, “We are very excited to release the first song from Zenith! We are packing this one up, and two more new songs with us for the Beast in Black tour that starts this week! 7K will actually be shooting the music video for Chasing the Mirage while we are on tour! We had a great time filming this song a few months ago with our main man, Jimmy Garcia. We hope you love it!”

DMG CEO Maurizio Iacono comments on the upcoming release:
“Seven Kingdoms have released a thunderbolt of a single with “Universal Terrestrial” and are poised to bring American power metal to international levels with their new album Zenith“

Zenith was recorded at Morrisound Recording in Tampa, FL and 8 Arms Audio in Orlando, FL during the summer and fall of 2021. The record was Mixed and Mastered by Jim Morris at Morrisound Recording in November of 2021. The Cover Art was done by Jan Yrlund (Battle Beast, Korpiklaani, Windrose). You can pre-order ‘Zenith’ at the link below! ‘Zenith’ is scheduled to be released worldwide on June 17th, 2022 via Distortion Music Group.