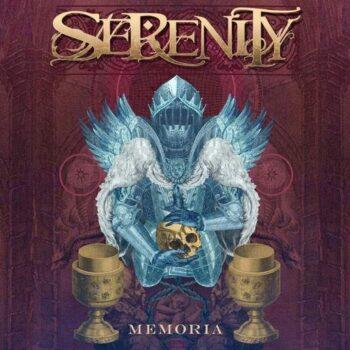 Normally, symphonic metal historians SERENITY share long-forgotten stories of ancient kings, queens and mythical legends. But now, the assembly is looking back at their own band history and legacy of 20 years on their new live album and cinematic journey, MEMORIA, out now digitally, and in physical formats on January 6 via Napalm Records.

Fitting for the live album’s release, the quartet surprises fans with their second single, “Spirit In The Flesh”. Dressed in their characteristic folk sound and combined with enchanting tunes, the song is supported by Niklas Müller, drummer of Symphonic Metal upstarts AD INFINITUM, on rhythmic drums. The song comes along with a video which captures the feverish atmosphere of SERENITY’s dedicated fans.

Singer Georg on “Spirit In The Flesh”:

“The track was originally released on our album Codex Atlanticus, named after the famous work of Leonardo DaVinci, who was our inspiration for the entire album. We wanted to tell the story of his courage to face the wraths of the church against scientists and his strong will to explore the secrets of nature at all risks. The song itself convinces with a strong folk melody that is pointed out even more in the acoustic version. And of course, we are grateful for the support of our longtime friend Niklas Müller (AD INFINITUM) giving the song an energy kick with his drumming.”

Symphonic metal unit SERENITY offers a new approach to beguiling the senses with their live performance, MEMORIA, now on DVD and BluRay! Interpreting their illustrious songs anew in a conceptual show, they are sure to enchant listeners and viewers alike. Showcasing incredible hit density, the band embraces their symphonic power and provides a magical feeling throughout the entire performance. From classic folklore pieces like “Coldness Kills” which intrigues with its fairytale-like sound and classic instrumentals, to “Set The World On Fire” with catchy hooks and dashing soundscapes, SERENITY give it all in every single piece.

In “Set the World on Fire” and “Broken Dreams”, the unit is joined on their journey by the smooth and magical voice of Marco Pastorino awakening old myths and legends anew. These dreamlike soundscapes are supported with enchanting guitar riffs in “Velatum” and “Souls and Sins” by none other than Sascha Paeth, the producer of Avantasia. This way, the band not only showcases their incredible musical talent supported by talented vocalist Georg Neuhauser but also their love and dedication for the art of music. Touching ballads like “Journey Ends” and “Fairytales” supported by the incredible vocal range of legendary Visions of Atlantis vocalist Clémentine Delauney forge reminiscence of earlier times, while moving duets like “Changing Fate” refer to multifaceted Scottish mythology. In “Spirit of the Flesh”, Nicklas Müller offers rhythmic support by adding steady drums. As a special bonus on MEMORIA, the band taps Sascha Paeth and Michele Guaitoli from symphonic metal greats Visions of Atlantis for their stage performance of “Souls and Sins” and “Legacy of the Tudors”.

“After a long time of waiting, we’re excited to finally release our first live album. We still think back to the evening when we performed this very special show at KulturQuartier in Kufstein and we’re so proud we could bottle the unique atmosphere of this night and release it now under the title MEMORIA. Being able to perform this concert in this terrific atmosphere of a theatre with so many guests was a really ‘once in a lifetime experience’ and we’re extremely happy to share it now with all of our fans.”

4. Set the World on Fire

15. In the Name of Scotland

New live release MEMORIA out Today! Order here: https://lnk.to/SerenityMEMORIALive Singer Georg on “Spirit In The Flesh”: The track was originally released on our album Codex Atlanticus, named after the famous work of Leonardo DaVinci, who was our inspiration for the entire album.