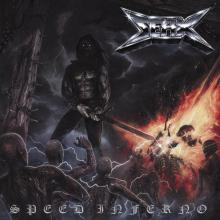 Seax was formed in Massachusetts in 2009 by their guitarist, Hel.

The five-piece was very fast complete and they started playing live shortly after and recorded their first album in August 2011. It was titled High on Metal and self-released by the band in July 2012. Re-released by EBM Records in 2012.

In 2018 the band was in Europe on tour, also at the high recommend Headbangers Open Air (end July)! The album Fallout Rituals came in 2019 only out in the U.S. Sadly short time later starts the worldwide covid cancelling.

But, now it’s 2022 and the band restarted with an awesome and pure Speed Metal attack! 9 catchy and fast hymns, with fresh and aggressive sounds – perfect to bring it on the stage! CD is coming out 30. Sept., vinyl will be out in Oct. via Diabolic Might Records!