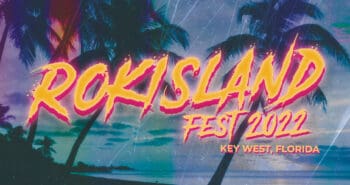 For 2 years now, I have been robbed of the ability to do what I love. Travel from Toronto Canada to festivals and events around the world. I have tickets upon tickets to things, all getting rolled over another year, each time bringing crushing disappointment. I was able to get to an event finally in October and the relief was incredible. Now with restrictions tightening up again for us and more travel hurdles and hoops, Key West was more daunting. But each obstacle passed fairly easily and to RokIsland Festival I went! 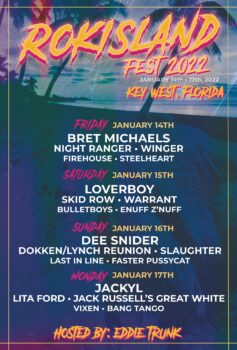 RokIsland took place January 14-17, 2022 on the island of Key West, the southernmost point of the USA. The four-day lineup included bands like Bret Michaels, Dee Snider and Jackyl among many, many others. This was the inaugural event for RokIsland and I severely hope there will be another round. RokIsland is a Key Music Festivals Production.

Not going to talk about specific bands reviews here, just in general experiences that I had throughout the event. You don’t need specific song-by-song band set reviews, do you? Of course, I might mention some of what I thought were killer sets and my faves of the entire event. But moreover what I’ll give you here is the lay of the land, the goods and bads so to speak.

Now first off, every event has its hiccups and no more so than a first-year kick-off. So it’s not really a “knock” against RokIsland, please don’t take it as such. But really, there weren’t very many and IMO the ones there were trivial. I get a lot of questions along these lines after the events I’ve attended. 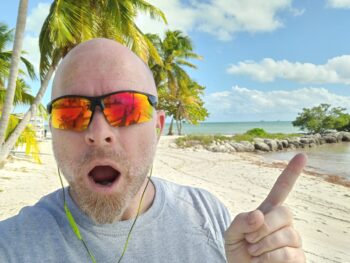 First off, Key West (if you’ve not been) is a beautiful island, the southernmost tip of the USA belonging to the state of Florida. While there are residents, the entire place is a “tourist trap”. Streets such as the famous main drag Duval are lined with gift shops and bars. It’s quaint, relaxed and easygoing with said bars open into the wee hours. And there’s no real following of open container laws, preferably not in glass, however. Yes, this means “to go” beers and drinking in the streets. I succeeded in not making home earlier than 4 am each night. Most of these bars have a variety of live bands. 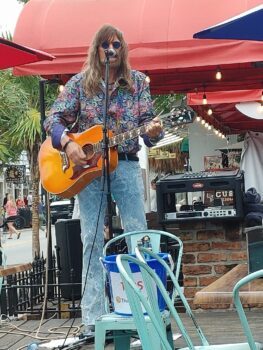 One of the best of these that I found pre-festival time, if you’re looking for a relaxed afternoon with drinks and food check out Dallas Doctor at Lucy’s Retired Surfer’s Bar & Restaurant on Duval. The dude can bang out classics on his acoustic guitar from The Beatles, Rolling Stones, Neil Diamond alongside 80s songs from Bryan Adams, John Cougar and even Violent Femmes. He’s personable and entertaining, but not Hard Rock or Metal.

Smokin’ Tuna Saloon each day had the official warm-up to RokIsland with the Big Arena Rock Show band. A cover band complete with costumes and the chops to convincingly do covers of AC/DC, GnR, Twisted Sister, Van Halen and so many more. These guys were a ton of fun to watch as well, very entertaining and packed the RokIsland crowd into the semi-covered patio area of Smokin’ Tuna Saloon each afternoon. 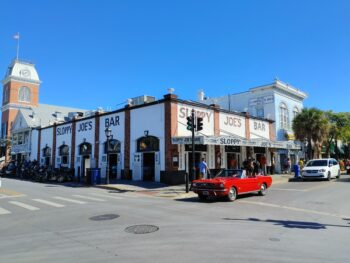 The official RokIsland after-party took place at Tattoos & Scars Saloon and we found ourselves there each night alongside other establishments such as Sloppy Joe’s and Durty Harry’s for drinks and live music. Who knew an old man could still stay up drinking until 4am….let alone navigate riding a bicycle back home afterwards!

The best way to navigate the island IMO is to rent yourself a bike. Bike riders are all over and I felt super safe everywhere I went. I rented mine from the “Hostel/Motel” I was staying at for about $100 for the seven days. Also, be warned, the hotels ARE NOT cheap in the area!

RokIsland had one of the most useful festival apps I’ve ever used. With travelling the world to many many great festival events, I have used several festival apps. Frankly, most are little more useful than showing the lineup. But RokIsland made excellent use of theirs I felt in passing on messages and updates about the events each day. Nothing worse than a festival that only announces something on Facebook for an international traveller without wifi…..and that’s even if the stupid algorithms show it in your feed! But the RokIsland app beeped with the update no matter where I was, wifi or not it seemed.

At The Coffee Butler Amphitheatre 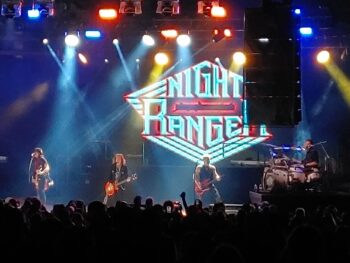 Speaking of wifi, on Friday, the first day of the official event (there had been an acoustic pre-party on Thursday….which was not exactly anywhere near the rest of the events for bike riding and required an Uber) when I arrived at the Coffee Butler Amphitheatre I was excited to find a RokIsland open public wifi network. However, sometime into the evening it disappeared and never returned for the duration of the entire event. Highly disappointing. It was clearly available and capable of use, yet the RokIsland organizers must have shut it down for some reason. This may not mean a lot in 2022, but as the world reopens and a higher percentage of internationals such as myself attend, this would be a great feature allowing more posting of pics, vids and tags etc thereby promoting the event even more. Something to consider RokIsland. 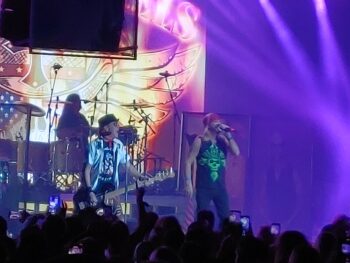 Having only the low-end pass, I can mostly only speak from this perspective. The venue was smaller than I expected, although I’m not at all certain where I even developed my expectations. The space laid out in front of the stage was sectioned off by level of passholder as you might expect. The bracelet/entry system RokIsland used worked excellently from what I saw. Each event attendee had a wristband that was required worn at all times. Each one outfitted with a chip and you simply scanned it to enter the event and the different areas within. For example, mine was a “Pearl Pass” (the low-end), so the scanner would flash red if I tried to scan into the “Diamond or Sapphire Pass” areas.

The wristband could also be set up and linked to debits and visa cards for easy cashless payments. Being a foreign tourist, this did not seem easy for me to do and I simply used my credit card in the POS terminals each round of drinks. My friend had the cashless linked, but it didn’t seem to work for him….or was that just a ploy to get me buying rounds on day 1….lol. 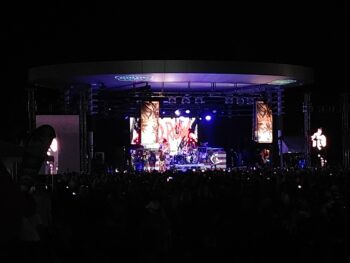 To my understanding, there were chairs set up in the higher-end areas on the first night. Which through the FB posts seems led to arguments and frustrations all around on the first night. Hey, I’m an old guy and I fully get desiring a seat when your legs become exhausted. But IMO, the stage front is not the place for seating at a concert or festival. Perhaps next year a slightly elevated platform to either side or at the rear could provide this option for those desiring? Maybe to create a little space for this some of the beer tents could shift a little further out and into the food area. Would still allow lots of options to collect beverages and free up the floor/tent space blocking stage views. Just my idea.

In any case, it seems that RokIsland listened to the FB postings and for day 2 and onwards, removed said seats. 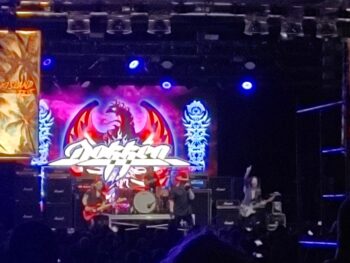 There were IMO too many tents in the viewpoints to the stage. While I could see and see quite well from most areas in the “cheap seats”, there were simply too many large white canopies to look around. Many of these were brought about in the form of beer tents. There was no shortage of availability of beverage and rarely a lengthy line that I saw. Also, the bar staff were amazing and super friendly in all my dealings. Great job to them all and the staff in general really. My biggest beef there would be that they ran out of Stella Artois and I was forced to consume the American swill-water known as Bud Light or Michelob Ultra…which granted were sponsors of the event, but awful beer to a Canadian…lol. 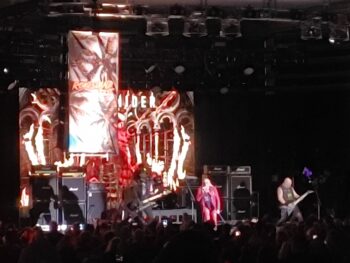 I found the food options to be quite good for me. I did, however, see some postings that there were no vegetarian or vegan options. Which while not for me personally, should be added for those who have chosen that lifestyle as well. But I found the pricing schemes of the available food (and beer for that matter) was no more price gouging than the rest of the island. That’s rare. Usually, at an event, you expect to pay a higher price than outside, but here everything was on par which was excellent (although in general quite pricey compared to home).

Overall, the entire event ran beyond smooth for a first time. There were some band dropouts and replacements ahead of the weekend, which were handled well. We did lose Autograph at the arena on their day due to inclement weather and travel issues to my understanding. Which also hampered the starting times on one of the days. Can’t blame RokIsland for Mother Nature’s hand in things! 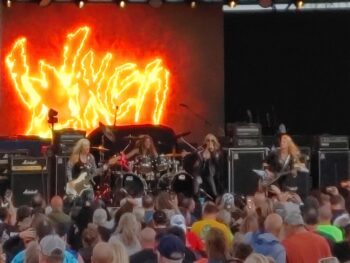 I’ve been to many of these things, as I said and this whole thing from my perspective was smooth and professionally ran. I will mention though, that at the end of the night after the last band finishes and you are trying to hustle all the patrons out faster, it’s not a good idea to close down over half of the washrooms! Either keep them open longer and be prepared that we won’t exit the exact minute the music stops or set some washroom trailers up outside the gates so we can pee out the Bud Light (ie: return it to its natural state….piss).

All in all, I’d have to say the worst thing about the entire weekend was having to endure Eddie Trunk. Happy to pay extra next year for him NOT to be there!

Pre-Registration for RokIsland 2023 is open now through the website link below…join me and a couple thousand other awesome folks on the beautiful island of Key West next year….first drinks on you?