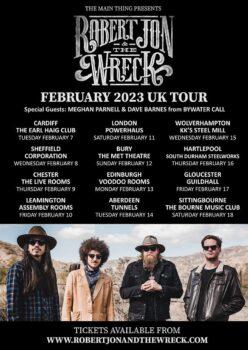 Bluesy soulful Southern rockers Robert Jon & The Wreck return to the UK early 2023 for a series of 12 shows (9 in England, 2 in Scotland and 1 in Wales) in February. The band led by Robert Jon (the clue is in the name!) formed back in 2011 in Orange County California. They released their first album Glory Bound in 2015 and have since released 5 full albums of totally new material.

Their last one, Shine A Little Light On Me Brother blew me away so much I made it my number 1 album of 2021. There is also a live album and 2 compilations that feature session, live and the odd new song. Their latest album Wreckage: Vol 2 is a mix of exclusive in-studio recordings with some live material and a couple of new tracks, one of those being the moving “Dark Roses” which is about the loss of a close friend to the band. See below for video!

The band is comprised of musicians Andrew Espantman (drums/backing vocals), Steve Maggiora (bass/backing vocals), Henry James (lead guitar/backing vocals), Warren Murrel (bass/backing vocals) along with said Robert Jon Burrison (lead vocals/guitars). You might have noticed that all the band sing so there are some fantastic harmonies on show with these guys. The music has elements of blues, southern, soul, Americana and old-fashioned hard rock and can go from utterly joyous songs that almost become gospel due to their harmonies to longer blues workouts where the players get to show their skills. Live they are a force of nature, they have the ability to lift one’s soul and make you feel better all round, as I testitified the last time they came to the UK HERE.

Support comes from 2 members of Toronto-based blues rockers Bywater Call. Vocalist Meghan Parnell and slide guitarist Dave Barnes will be along for the ride and warming everybody up in advance of the headliners. I have noticed that there are videos of Bywater jamming along with Robert Jon & The Wreck so perhaps we might see both acts having fun together onstage some nights? I don’t know, the only way to find out is to get along to a gig or two on this upcoming UK tour.

The All Important Tour Dates: