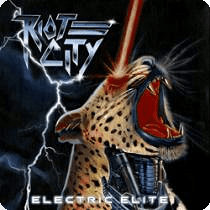 Electric Elite is the second studio album of RIOT CITY from Canada and this is the perfect follow-up to their highly acclaimed Burn The Night debut of 2019!

The debut album became ‘Album of the Month’ in Germany’s Deaf Forever magazine and was voted by many media as one of the best albums of its year. RIOT CITY was also voted as one of the best newcomers by various media, while metal fans also supported the release and the band that already has completed two European tours and many festival appearances – with many more to follow supporting Electric Elite.

Following Burn The Night, RIOT CITY are keeping their ripping and screaming heavy metal but also going one step further with the addition of US heavy and power metal elements to their heavy-speed JUDAS PRIEST-and-NWOBHM-inspired sound. Singer Jordan Jacobs handles lead vocals in the new album and the debut album’s singer/guitarist Cale Savy is now focused exclusively on lead guitars, while Roldan Reimer (guitars), Dustin Smith (bass) and Chad Vallier (drums) have a major contribution to the bombastic album. One can think of various influences and bands that have inspired RIOT CITY but here, we also have a strong vibe of originality bringing in mind the creation and the magic of classic ’80s metal albums. The band’s musicianship has evolved even more and everything has been worked in every single detail, keeping at the same time their passion for music. Once you listen to the new album, you can understand the RIOT CITY vibe from the first song, “Eye of the Jaguar“, with the lightning-fast tempo, the guitar melodies and the over-the-edge singing. But there are also mid-paced songs such as “Tyrant” where you can also listen to how detailed and careful the guitar work is, including the solo parts. Few modern heavy metal bands have such anthemic guitar parts like RIOT CITY in songs like “Lucky Diamond“. The element of melody is also stronger in the new album, something that’s more than obvious in “Ghost of Reality” but also in the 10-minute closing epic track, “Severed Ties“.

Electric Elite was recorded by Antony Blaine at AB Studios in Calgary, Alberta, Canada. It was mixed by Olof Wikstrand and mastered by Bart Gabriel.