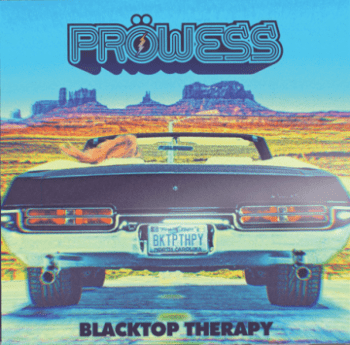 Pröwess, are a hard rock band from North Carolina featuring Scott Roby (21st Century Goliath) and Curly Staples on guitar, vocalist Dalton Bowes, bassist Kenny Mange and drummer Brandon Chinn. CGCM Podcast featured their song “No Survivors” off the 2017 EP, Headfirst, in a previous episode. The band announced the release of their debut full-length along with a release party via Facebook.

From the Pröwess Facebook Page: “It’s our first album, we’re proud of it and we wanna share it with you along with all of these awesome bands! The producer of the record, Tuk Smith, is bringing himself and his Restless Hearts backing-band from ATL to play. Fixed Faces from Greenville, SC and Paint Fumes from Charlotte will round out this awesome night!”

From the Pröwess Facebook Event Page: “Pröwess is proud to present the ALBUM RELEASE PARTY for their upcoming debut album Blacktop Therapy live at Amos’ Southend on Friday, January 3rd, 2020 – Join us as we throw down with an awesome lineup of bands to celebrate!!

Very special guests will be:

Shoutout to Belligerent [clothing] for partnering up for this show!