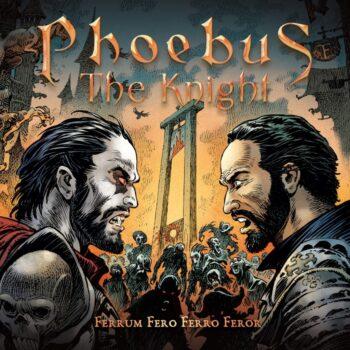 Successfully funded with a Ulule Crowdfunding, Ferrum Fero Ferro Feror was made with the 11 400 euros collected there, thanks to the fans!

Each track of this album is a chapter of Phoebus’ story, the knight alchemist. From the forgotten dimension of the Darkest Woods, going through the gates of Hell, to the crucible of Terror in Paris, you will follow Phoebus and his friends the Knights of Heliopolis, in an epic quest to defeat The Beast and his desire for eternal war.

To put all the events in a dramaturgic vision, the album is a blend of several musical moods, combining heavy ballads, metal tracks with majestic orchestrations and instrumental parts. Lyrics are for the most part in English and a bit of French, all performed with the lyrical bass voice of Axel, in clean and screamed vocals. You will hear Classic Symphonic Metal, Melodic Death Metal, Musical, Medieval lines and even parts composed in the style of Bach, Mozart or even Rachmaninov!

Witness the legendary fight of Phoebus and his friends against the Beast and the vampire knights! To guide you in this quest, the master drawer Mohamed Aouamri (Sylve, Mortepierre) illustrated each chapters and gave life to this world of Fantasy and History.

Ferrum Fero Ferro Feror, Phoebus’ first adventure with his companions, the Knights of Heliopolis, is waiting for you!

Go on an epic and original musical adventure, mixing symphonic metal, Heroic-Fantasy and History, written by Axel de Montalembert, composed by Adrien Djouadou and performed by PHOEBUS THE KNIGHT.

Dear fellows ! Here is the video for the song “Children Of the Night” taken from our first album “Ferrum Fero Ferro Feror” that will be released this January via Renaissance Records ! In this song, the Beast has been sent to the very dangerous dimension called the Tartarus by Phoebus and Selene after an epic fight (during the song “The Scarlet Dance”).

The official music video for “The Scarlet Dance”, from the upcoming PHOEBUS album Ferrum Fero Ferro Feror. Please SUBSCRIBE if you like it ! Style: Symphonic Power Metal For fans of : Nightwish, Epica, Rhapsody and Powerwolf among a lot more other bands !