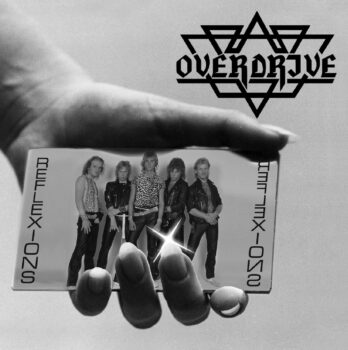 Overdrive are one of the most revered names among Sweden’s original wave of heavy metal at the dawn of the ‘80s. The band indeed formed in 1980 from two local bands, Paradize (recorded one 7″) and Ocean (recorded two 7″‘s and an album). In 1981, the self-financed MLP Reflexions was released, which is now quite a collector’s item. The band also recorded the non-LP tracks “Tonight” and “Damnation Angel” for the local compilation Rockslaget (SOS 1982). Overdrive was soon contacted by Planet Records, and in 1983, they signed a deal, which resulted in the two cult albums Metal Attack (1983) and Swords and Axes (1984).

But whereas those two full-lengths displayed the speedier, more OTT side of Overdrive – and for which many would say is “the Overdrive sound,” both during their original incarnation and their successive reunion during the 2000s – it’s their humble beginnings with Reflexions which shows a unique side of the band. Undeniably a product of the time, Overdrive on this energetic, effervescent first recording displayed the hooks and spirit of the nascent NWOBHM movement, particularly its most earworming adherents like Heavy Pettin’ and early Def Leppard. Brighter and bursting with a joy shaded with sensitivity, at 15 action-packed minutes, Reflexions is a prime slice of early heavy metal – and one, sadly, Overdrive would not repeat again.

However, Overdrive were incredibly busy during their early days, and other recordings and live shows exist from this period. This new deluxe reissue of Reflexions includes crucial documentation of that era across the rest of Disc 1 and Disc 2. On Disc 1, in addition to the original Reflexions record, one will find an absolutely cracking live-on-the-radio recording that’s basically an album unto itself! Spanning an additional eight tracks, this recording took place in December 1980 at the studio Radio Blekinge and is Overdrive at their early hook-heavy best. On Disc 2, subtitled Live in the Raw 1981, we get a full 37-minute show that displays the band at their rawest and sweatiest. Still, the hooks are king here, and they even include covers of April Wine and Axe.

Go back to a simpler, sublime time with this deluxe 2CD reissue of Overdrive‘s Reflexions!