OUT OF THIS WORLD – Out Of This World (Album Review) 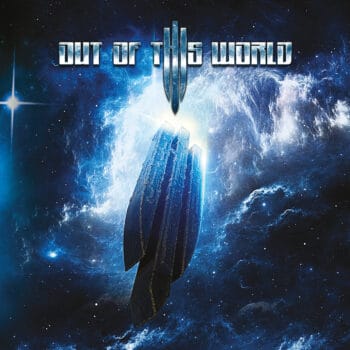 OUT OF THIS WORLD – Out Of This World

Out Of This World is the name of a “new” band featuring ex-Europe man Kee Marcello who appeared on 2 of their albums including one called Out Of This World. The reason I have put quotation marks around the word “new” is because also in the band are Tommy Heart (vocals, Fair Warning) and Ken Sandin (bass, Alien) who were part of the band called Kee Of Hearts which released an album in 2017. There is one member here that was not part of that outfit and that is drummer Darby Todd who has played with quite a few bands and most noticeably recently played as part of the emergency band for Devin Townsend when he headlined Bloodstock Metal Festival. None of the band met until about 3 days before the event and played a stormer. I think that speaks of Darby‘s musicianship alone. The other 3 have apparently been friends and worked together a few times through the years so it is no surprise that they are tight as the proverbial duck’s arse!

It is an album full of classic AOR material, a vocalist with strength and emotion, loads of vocal harmonies, some tasty solos and courtesy of the new boy some incredibly powerful drumming nudging the album at points more into hard rock. It has 10 songs with 3 demo versions tagged on at the end (on the copy I received). The whole thing was mixed by Ron Nevison who of course has worked with artists like Ozzy, Heart, Damn Yankees and last worked with Kee on the aforementioned Europe album from 1988. There are tons of keyboards throughout and some of them are played by Don Airey (Deep Purple and ex-Rainbow amongst many others).

Looking At The Songs:

As I noted, on the copy I received for review there are 10 original songs with 3 “demo” versions of tracks from the original 10. I believe there is a bonus edition with a second CD with 7 live songs as well. So going with what I have here I can say that most of the songs are either in the 3 minutes or 4 minutes plus except for the opening song “Twilight” which clocks in at over 7. There are over 40 seconds of music before any vocals and it includes both some parping keys and a shit load of massive drum fills before the riff kicks in and finally the vocals. Those vocals of course sound fantastic, soulful yet powerful with plenty of grit to go with the melody. The chorus when it hits is huge (of course) going as it does along the lines of “twilight… hang tight… how I wish this moment could go on forever“. With being a tad longer it allows Kee more solo time and it is the uplifting, soaring kind of solo that grabs at the heart. After the false ending, it focuses again more on the keys and thunderous drum fills. 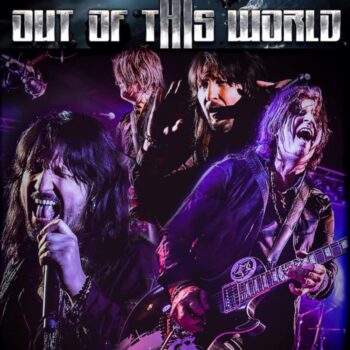 Out Of This World: The Band

The songs sometimes float between heavy rock verses and AOR choruses or occasionally the other way around with only a couple heading more towards full hard rock totally. There are about 3 songs that lean more towards hard or heavy rock including “Hanging On“, “Lighting Up My Dark” and “The Warrior”, with the latter being a full-blooded rocker with plenty of shredding guitar work running through it. It reminded me of early Van Halen and I liked that it allowed more room for the bass to be heard. “Lighting Up My Dark” does have plenty of keys especially at the start but when the riff kicks in it is a good one. The guitar soloing on this is fantastic.

The tracks that lean more towards straight-up AOR include possibly the strangest track “Staring At The Sun” which after an opening of keys followed by furious drum fills heads into almost a Police-type vibe even vocally! It doesn’t stay like that, well the Police could never have written the chorus here, it is joyous! Most of the choruses are strong and often feature what sounds like a choir, there certainly sounds like more than 4 folks at one time harmonizing at points (Good chance they have multi-tracked some of their vocals as they are massive).  On “Up To You” there is even what sounds like a heavenly choir singing “ooooohh”s at points. This is also one of those songs where when the vocalist either moans or groans using no words at all you sit there going “yeah, I know what you mean“. He doesn’t even need actual words to convey feeling. That is quite a talent.

The album (not including the 3 “demos”) finishes with 2 ballads, the first “Only You Can Teach Me How To Love Again” which reminded me of some of Dan Reed‘s more mellower moments, sparse but with beautiful harmonies and the second “Not Tonight” which is a bit ballsier. The chorus reminds me of something else which I cannot put my finger on, however, the track sounds terrific and that chorus is extremely lusty. 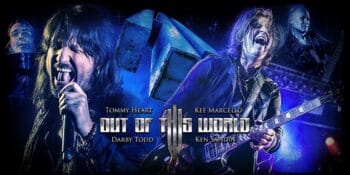 As a new project’s first album this is most impressive, even given the pedigree and experience of the band members. Classy melodic rock/AOR merging at times with hard rock, featuring great vocals, huge choruses, plenty of tasty and well-placed guitar solos, along with a ton of keys (and drums). Hopefully, this is just the start and they make more albums as I definitely would like to hear more from these guys.