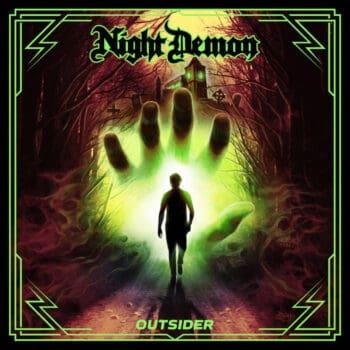 For more than a decade, Night Demon have defiantly flown the flag of traditional heavy metal, unwavering in the face of shifting industry trends and unscarred by global calamities. Even as they spent 2022 touring heavily worldwide in support of their compilation album, Year of the Demon, the trio consisting of Jarvis Leatherby (vocals/bass), Armand John Anthony (guitar) and Dusty Squires (drums) continued working tirelessly behind the scenes. The objective? To perfect their first collection of all-new material since 2017’s acclaimed Darkness Remains album. Make no mistake: Outsider represents Night Demon’s boldest, most ambitious effort to date. Never content to rest on their laurels by rehashing past glories, the band have challenged themselves musically and lyrically, pushing creative boundaries and evolving their sound far beyond their NWOBHM-worshipping origins into something truly singular.

From a lyrical standpoint, Outsider marks Night Demon’s first full-blown concept album. To be sure, the band have always experimented with embedding thematic linkages between songs on each release, dating back to their 2015 debut album, Curse of the Damned. On Outsider, however, lyricist Jarvis Leatherby has dialed into a fully cohesive tale of alternate realities, mysterious portals, and the supernatural, intertwined with universal human feelings of alienation, loss, regret and revenge. Inspired by Leatherby’s lifelong affinity for horror movies as well as his pandemic-induced exile in the countryside of Northern Ireland, Outsider weaves a compelling yarn from its pastoral beginnings to its heart-pounding finale.

Of course, this kind of epic storytelling demands an equally expansive musical backdrop that ebbs and flows to convey the full emotional range of Outsider. To achieve that result, Night Demon have reimagined the band’s songwriting and arrangements by embracing progressive elements and a newfound sense of dynamics that lend the music a decidedly cinematic quality. Long-time fans should not be alarmed. Outsider sounds like Night Demon through and through. The songwriting is perhaps the catchiest in the band’s discography, boasting massive hooks such as those found on the earworm title track, which is also the lead single. Elsewhere, there are plenty of adrenaline-fueled, headbanging moments on display in songs like the rollicking “Obsidian” and “Escape from Beyond,” with its searing guitar riffs, pounding drums, and urgent vocals. The difference this time lies in the peaks and valleys, the highs and lows. “Beyond the Grave” and “A Wake” showcase a somber dimension of Night Demon only hinted at on previous releases. The masterful closing track, “The Wrath,” encapsulates all of these dynamics in a roller coaster of wildly swinging emotions, tempos and feels.

Simply put, Night Demon take the listener on a journey with Outsider. It’s a heavy and intense ride, so buckle up. You may never be the same again. And Night Demon are breathlessly awaiting the opportunity to bring Outsider to life on stages all over the world. Plans are afoot to perform the album live in its entirety when time and logistics allow, so keep your eyes peeled for dates at a city near you. Don’t wander in the dark, because Night Demon will find you. (text taken from Night Demon Bandcamp page).

NIGHT DEMON – OUTSIDER (OFFICIAL VIDEO) Taken from the album ‘OUTSIDER’, out March 17th 2023! Listen and pre-order here: https://nightdemonmusic.lnk.to/OUTSIDERID Music by: Jarvis Leatherby and Armand John Anthony Lyrics by: Jarvis Leatherby and Laura Mulkeen Video credits: Lyrics: Outsider Solitary is the path you’re on Outsider Hoping to return where you belong They look familiar yet they seem so strange Is it them or you who’s really changed?