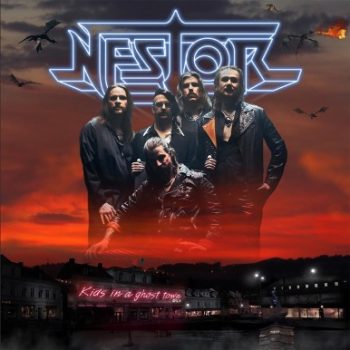 Formed more than three decades ago in 1989 only to fall into a slumbering hibernation lasting until last year, cult-followed Swedish hard rock outfit NESTOR decided to reunite, reinvent the iconography of rock and restore its glory in 2021 with their debut album – yes, their debut album – Kids in a Ghost Town. With friendship as the foundation of this unique, seemingly unbreakable bond, NESTOR are back for good and better than ever!

NESTOR reveals a new rendition of their song “It Ain’t Me”, off their acclaimed debut album. In this stripped-down acoustic version, the band shows that they are a jack of all trades, able to transform their beloved old-school hard rock into timeless and heartfelt adaptations.

Watch the new music video for “It Ain’t Me” below.

Based on a true Friendship!

NESTOR embraces influence from the 80s with a sense of nostalgia and authenticity. With glossy production, NESTOR takes you straight back to the golden age of rock music, openly displaying their influences: from Bon Jovi and Aerosmith to Journey and Foreigner. With over 30 years of existence, NESTOR turn back time while being one of the hottest newcomers of modern rock music, with millions of streams on Spotify and hundreds of thousands of views on YouTube to boot, even having shared stages with the almighty ALICE COOPER, hard rock powerhouse H.E.A.T. and supporting the legendary KISS in Stockholm on their 2022 stadium tour!

Upon its initial release, NESTOR’s acclaimed first album, Kids in a Ghost Town, sent their fans on a journey back in time to the 80s, both in sound and spirit, as well as with their completely self-produced music videos – all of which spurred a nomination for a Swedish Hard Rock/Metal Grammys-Award! This is an album of such impressive scale in fact, that Napalm Records has decided to re-release Kids in a Ghost Town as an exclusive Deluxe Edition, set for release on September 30, 2022!

NESTOR Singer Tobias Gustavsson about the re-release of Kids in a Ghost Town:

“The ambition with the re-release of the album is to extend and deepen the story of NESTOR. By adding three new songs, we’re letting the listener once again go back in time and remember how it used to be in the late 80s!”

1 A Fanfare for the Reliable Rebel (Intro)

3 Kids in a Ghost Town

9 I Wanna Dance with Somebody

Exclusive Kids in a ghost town Deluxe Album Edition to be Released on September 30 via Napalm Records!Pre-Order here: https://lnk.to/KidsInAGhostTownFormed m…