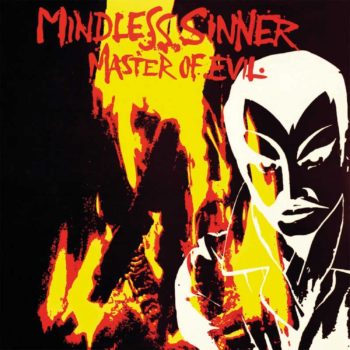 Having released a meager four full-length studio albums in 37 years Mindless Sinner have managed the remarkable feat of putting out two in the same year.

Granted, Master of Evil is a vinyl collection of a previously released EP and some demos but it still counts in my book.

Master of Evil comes hot on the heels of the outstanding Poltergeist album. You can read my band bio and review here. A fine example of traditional metal that also harks back to the glory days of the New Wave of British Heavy Metal.

With Master of Evil, there’s no harking back to anything, it was originally recorded in the midst of the greatest movement in metal history. It lives and breathes NWoBHM, you can almost taste it.

Side A of the album consists of the four tracks which were first released back in 1983 as the Master of Evil EP. As you would expect from the NWoBHM the production is somewhat bare. It is as raw as you can get, and that’s of massive appeal. The music and vocals are set to the same levels and occasionally the vocals sound like they’ve been recorded in a toilet on a Central Station platform. Having said all that the songs are just great.

“Broken Freedom” kicks it off in superb fashion, rampaging into my brain to wreak havoc with riffs galore, great soloing and pacey rhythm.

“Key of Fortune” carries the mantle and delivers much the same hard and heavy result.

There’s no let-up on the title track which has the best solo on the album, and that’s no mean achievement. The pace and power keep on coming at you like a tsunami.

Side A ends on another high with “Screaming for Mercy”. If you’re familiar with obscure NWoBHM bands, they are very much in the vein of bands like Virtue, Crucifixion (UK) and Gaskin. 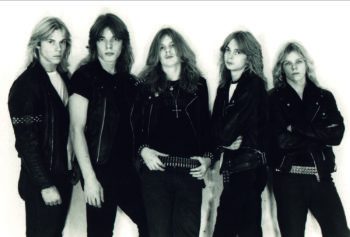 Side B of Master of Evil sees Mindless Sinner reveal five demos that never saw a release as far as I can tell. The first hit in the face is what surely should have become their anthem, “Mindless Sinner”. It’s a fist-pumping belter which truly beggars belief as to why it remained a demo, especially with vocalist Christer Göransson in top Rob Halford form.

Rollercoaster riffs are the signature to “Higher and Higher” and it rattles along at a fair old lick with some cracking guitar work interwoven into the piece.

All three demos come from 1983 and the audio assault continues with “We Go Back”. A deep groove underpins this heavy, heavy track and comes up trumps.

Screaming riffs welcome us to “Heavy Metal Will Never Die” and if it’s at all possible the pace has increased too. If these are demos then what the hell would the finished tracks have been like?

We now finish with a ballad. Who am I kidding? Of course it doesn’t. It finishes on the bollock kicking cruncher of “City Games”. It does however contain the only tender moment on the whole album which they naturally pull off spectacularly. What a great way to finish a great album.

Whether they were a victim of circumstance or that life simply got in the way, they should really have been at the head of the charge of NWoBHM in the 1980s. With quality like this, you just can’t go wrong.

Master of Evil is set to be released on Pure Steel Records on November 20, 2020.