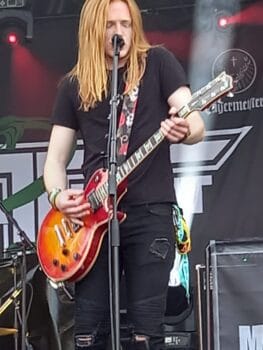 Late on the first night of the Call Of The Wild Festival, I was up in the media area working on my notes for the day when I got chatting to another media-based person about the opening band of the festival Mad Haven.

Now this lovely lady (Tina from Forge Ahead Initiative) just happened to be involved with these young lads. Very kindly she phoned them as they were still onsite as far as she was aware. In fact they were, so she asked if they would come up for a chat/interview with me. Now just to point out, at this point it was 11:30 towards midnight and their dad (there are 2 brothers in the band) was about to drive them home to Wales but they said yes to doing an interview.

I was stunned that they were willing to do that, it however shows how serious they are about their music and their career. All 3 of them were chatting, answering questions, and some points they finished each other’s sentences, so it is hard to always say which one of them was speaking at times. In that case, I will mark it as “band” and if I know for definite which member said something I will note their name. The band comprises of Alex (drums), Tom (guitar) and Morgan (bass).  Apologies to the band for not being able to mark each person’s comments! Hopefully they will understand. Anyway, let’s get started…

CGCM: Thank you so much for holding off going home to chat with me. Can I say first of all how much I enjoyed your set today. I really enjoyed it. (They kindly said “no problem” and  “thank you” to those comments). If I am right you guys are from Wales?

Mad Haven: We are

CGCM: Also is it right that 2 of you are brothers?

Mad Haven (Alex): Yeah, me and Tom are, or should I say Alex and Tom, drummer and guitarist.

CGCM: From today’s set it looks like all 3 of you can sing too

Mad Haven: Yeah we all do (one of the band then says “2 of us sing and 3 of us have microphones” which leads to laughter and finger-pointing).

CGCM: Can I ask how the band started, you know, give me a bit of a history lesson?

Mad Haven: What was it, 2011? It was when 2 of us were at the same school, without Morgan as he joined later. We were sort of jamming in the rehearsal rooms and stuff and we thought “this is fun, wonder if we could do a local open mike night or something”. It kind of went from there, we did those kinds of nights locally then got a slot supporting a local tribute band, then we supported a local original band. Then about 3 years ago we met Morgan and we’ve been doing quite a lot of gigs since then. It’s all good fun and we enjoy it, that’s the main thing.

CGCM: Are you all from the same town?

Mad Haven (Morgan): I’m from about half an hour down the road from these guys, so near enough.

CGCM: You really are “NEW Wave” as you are actually a young band which seems cool.

Mad Haven: Yeah, one of us is 21 and the others 22. We are just trying to get out to every festival we can. If we are not playing, we are watching others or just speaking to folks handing out flyers. 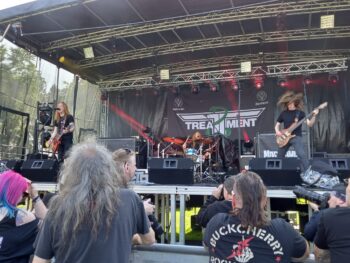 Call Of The Wild 2022: Mad Haven: The band Onstage

CGCM: So what are all your main influences?

Mad Haven (I think Alex): AC/DC is my sort of thing. Then it is everything that stems from them. Airbourne, The Treatment, man they were rocking tonight weren’t they?

CGCM: How they aren’t bigger after that performance I have no idea.

Mad Haven: It’s what you want to hear, no messin’ about rock ‘n’ roll, just gettin’ down to it. (At this point I think Tom takes over)

Mad Haven: I love the simplicity, guitar, guitar, bass, drums, vocals, that’s it. You know no backing tracks, no extra behind-the-scenes keyboards. Just straight-ahead rock, its what I like about them. Simple and effective, really good.

CGCM: I look around the guys and ask “any other influences?”

Mad Haven: Airbourne is a big one, perhaps the main one, again for simplicity. Also their energy. We’ve been to a few of their gigs and it is so effective what they do, running around everywhere. We thought “why don’t we do that?” People come to festivals and gigs not just to listen but to watch, it’s half and half. I also like the Foo Fighters and stuff, you know melodic catchy sorts of songs. We just try to merge everything into one that we like. Make it catchy, get toes tapping, heads bobbing whilst giving out loads of energy onstage.

CGCM: There was certainly plenty of energy from you guys today, it is easy to see that you are truly into what you are doing.  What about you Morgan?

Mad Haven (Morgan): My influences are completely different. There is all the sort of metals along with grunge and prog stuff, but I also like some weird stuff, electronica (at this point he names a Canadian 2 piece outfit which I can’t quite make out from the recording sadly), not dance music as such, keyboards and electronic drums. However in this band, it is a case of keep it simple, play what the song needs, although I do get to play a short bass solo at one point… (At this junction someone else piped up “you got 2 solos in half an hour, that’s more solos than I get” which again leads to laughter and pointing fingers.)

I made a comment about why I like bass players which led to a discussion over whether Morgan looks like a young Geddy Lee from Rush. There is much laughter and arguing. This is a band that loves to discuss stuff with everyone talking back and forth.

CGCM: You guys seem to love to move around on stage.

Mad Haven(Tom): It was great to have mikes on both sides of the stage, we don’t usually play stages that big so it was great, when we crossed sides we could stay over longer on the other side. Crossing back and forth was fun today. 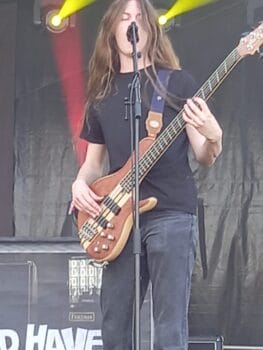 CGCM: As I am just learning about you can I ask if you have an album out yet?

Mad Haven:We have a live album coming soon, think it’s out June 10. We have a few singles and EPs out. After the live one is out we will focus on a studio album. We have started writing for it, but can’t fully focus until after the live comes out.  You can put Spotify on shuffle and it could be like listening to an album (laughing).

CGCM: I do sometimes use Spotify to check out the odd song but prefer to listen to whole albums. You know hearing an artist’s songs in the order they feel is best. Also, it isn’t a great format for bands making money…

Mad Haven: Is it 4 or 5p a listen or something? (One of the guys then shouts out “So folks get listening on repeat”). I think it is things like t-shirts and merch in general that keeps us going anyway. Those things kind of pay for hotels at times if we need one and for fuel, although everything seems to be much more expensive at the moment. Hotels as more folks holiday at home and petrol just going up. The folks buying merch keep us on the road. It is really great that folks are supporting us at the merch stand, even buying our cds which means they are taking our music home.

At this point, I asked about Scottish dates wondering if there were any on the horizon.

Mad Haven: We are playing Bathgate Dreadnought supporting Wicked Smile from Australia. Should be a good night, it is us, them and the guitarist’s daughter, I think, Cassidy who are all playing.

CGCM: I take it you had fun today? It looked like it.

Mad Haven: The whole band were like “yeah”, “oh yeah” and “absolutely“. Then one of the guys took over by saying… It’s the biggest stage we have been on I think, one of the biggest gigs we’ve done. There is thinking about it a place in Wales we played which has a bigger stage, but not as big a gig. It was a really good crowd, so responsive. I mean it was a Thursday afternoon, we didn’t expect too many watching us but it was great, you know a really good turnout.

CGCM: It was a good size crowd that is for sure, everyone around me were certainly digging it.

At this point, we called an end to things as it was very late and the lad’s dad was waiting. However, being a damned hard-working band when another website who were by this time in the media room asked for an interview too they went away into the other room and did that as well. They were still hard at it after midnight! With attitude like that they, even more, deserve all the success in the world.

A huge thank you to all of them Alex, Tom and Morgan along with Tina who helped me get the interview and finally to the lad’s father who was willing to wait so they could speak with CGCM.

The band are doing 2 dates with Wicked Smile those being:

Check out my other articles, interviews and reviews here. Tom.