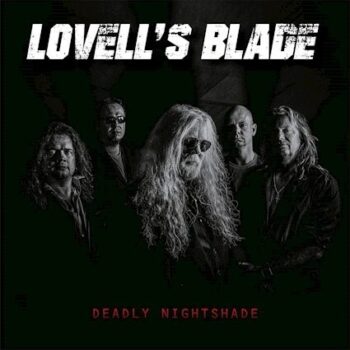 NO DUST RECORDS has announced the European release of the 3rd full album from Dutch rockers LOVELL’s BLADE titled Deadly Nightshade on April 1, 2022.

The CD will be distributed in the United States via ANIMATED INSANITY RECORDS.

The advanced single “Running Out of Time” has been released prior to the album street date.

Their debut album Stone Cold Steel was recorded and mixed by Serge Naberman at the prestigious Claim To Fame Studios and was released in March 2017 by Divebomb Records in North America, Into The LimeLight Records in Europe/Asia and Classic Metal in South America.

Their second album entitled The Nightmare Begins was released early 2019 by No Dust Records. They have been performing continuously since and shared the stage with bands such as Thunder and Armored Saint.

Their third album Deadly Nightshade was written in December of 2019 through to January 2020 but due to the Covid-19 pandemic and dealing with personal tragic events, the band could only start recording in 2021. The album was recorded and mixed at Headvillage Studio (owned by their drummer, Noel) and mastered by Erwin Hermsen at Toneshed Recording Studio.

The album is once again a varied selection of power rock themes and consists of a wide scope of writing styles, keeping the album interesting from start to finish. Deadly Nightshade cements their position as one of the most innovative power rock bands available at this present time. Experience and skill in composition have always been a distinguishing characteristic of Lovell’s Blade and this album anchors just that! The band plans to continue writing and performing into the foreseeable future. With musicians from bands like Picture, God Dethroned, Nembrionic, Emergency, Detonation and many more they guarantee to rock wherever they are.