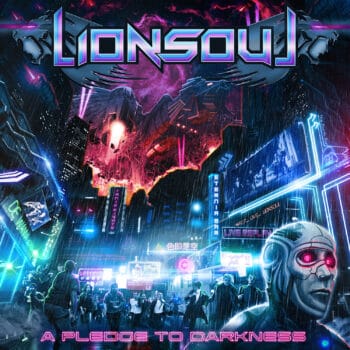 LIONSOUL – A Pledge To Darkness

Rockshots Records is proud to announce the signing of Italian heavy/power metal band LionSoul for the release of their new album A Pledge To Darkness this coming April 2022.

A Pledge to Darkness is the third album of the band, following the highly acclaimed Welcome Storm (Limb Music). The record is a huge step forward in the band’s career as it is more heterogeneous, in some ways darker than the previous ones. It brings with it nuances ranging from thrash to melodic death metal, including some death metal vocals in order to give more emphasis to certain passages. The album is a composition of different stylistic approaches that converge into the power/heavy roots that still remain at the basis of their sound.

The songs range from a classic power metal opener with spatial atmospheres up to a futuristic western ballad, from speed metal tracks – that wink at thrash and melodic death metal – to 80’s synth waves tunes, from mid-tempo hymns in Teutonic/industrial style to the almost omnipresent Cyberpunk themes.
A Pledge to Darkness remains in all respects a power metal album but with some dosed contaminations.

“Imagine your planet at the end of its life and you have the burden to preserve the knowledge. So you take a spaceship for a trip to L.A. in 2049 meanwhile you pass through a portal between 1953 to 1986 and also you change your skin to save the human race from a virus.” comments the band.

A Pledge to Darkness is due out on April 29, 2022 and it’s already available for pre-order: https://bit.ly/LionSoul_CD

JavaScript is not available.